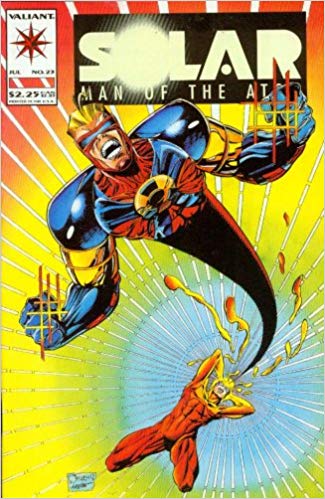 The penultimate title in the stack was one of the more marquee characters in Valiant’s lineup, a character that like Magnus and Turok, was published by another comic company back in the 1960s and to my knowledge is not part of the current Valiant lineup–in fact, I think that the relaunch was only with the characters that were outright created for Valiant because in the years after Acclaim/Valiant’s collapse, the rights had been picked up by other companies.

Solar is the Captain Atom/Dr. Manhattan of the Valiant Universe, it seems.  There’s cosmic adventure and implications and he’s fighting threats that go beyond the earthly ones of Bloodshot or H.A.R.D. Corps.  I read through issues #21, 23, and 33, and the first two of those dealt with Master Darque’s machinations (of which there were a lot in Valiant’s books–were they building to something?) as well as an inner conflict for Solar that led him to splitting into two, the other being “Solar the Destroyer”, who is the focus of issue #33.  Kevin Van Hook, who has written a number of these Valiant comics, is the writer throughout these issues and the art is by Peter Grau, another name I’ve seen pop up numerous times.  We do have the pleasure of two Quesada/Palmiotti covers as well.

Like Magnus, this was an entertaining story and I could see why Solar wound up being so pivotal to Deathmate (his romance with WildC.A.T.S.’ is what causes the two universes to merge), but whereas the Will Payton Starman and Marvel’s Quasar series seem to do a great job at mixing superhero action and the cosmic, this comes close but ultimately doesn’t know what it wants to be.  Solar at times seems like a guy trying to control and understand his powers and at times seems to be a being of great power trying to understand humanity.  The problem seems to be that book doesn’t know which of these it’s going to commit to being.  It’s a solid read that might be worth a digital browse if the price is right, but I’ll skip this in the bins.