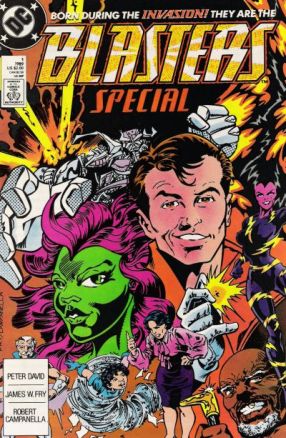 As I made my way through the “First Strike” podcast that looked at every issue and tie-in to the 1988 DC Comics crossover Invasion!, I would pull out any comic that I owned and read it before I listened to the episode.  This wasn’t very time consuming because I only have the trade paperback of the main Invasion! issues and a couple of the crossovers–mainly, Detective Comics and Wonder Woman.  However, I do own the two issues of the Will Payton Starman series and picked up the Blasters special during my LCS’ “Shortboxtober” in 2018.

They’ve both got their moments, but I don’t know if they’re issues that would get brand-new readers wanting more.  Blasters was a team of newly developed heroes who all survived various Dominator-sponsored experiments on the outer space prison Starlag; in fact, there was a significant portion of Invasion! #1 devoted to their creation.  So it was natural that they would get some sort of spin-off from the series, much like Grant Morrison’s run on Doom Patrol was set up via that series’ two crossover issues.  Unlike the Morrison DP, however, the Blasters were not exactly something that fans–or DC editorial, for that matter–wanted and this special was them throwing someone a bone and at least tying up a few loose ends (I guess).

It’s not terrible.  Peter David is the writer and James Fry and Robert Campanella handle the artwork, and they take a silly, irreverent tone, giving us “The Animaniacs do DC space adventures.”  Okay, it’s not exactly like that (especially since this predates that cartoon by a few years), but there is a sense of looniness as Snapper Car (the former Justice League “mascot” that I think fans tend to want to forget exists) and all of the team members suddenly have their powers manifest and they help thwart an invasion from the Spider Guild (an alien race that I believe caused trouble for the Omega Men at one point).  David’s good at writing space adventures–he wrote novels and comics for Star Trek that I remember enjoying back in the day–and he can also write team books, so he at least gives us a solid story.  It doesn’t take itself too seriously, though, and while that is sometimes a good thing, there are quite a few jokes that don’t stick the landing.

Starman is a little more serious of a title (although the Will Payton series doesn’t take itself as seriously as the Jack Knight series), and while I’ve only read a couple of issues so far (these two Invasion! books, the War of the Gods crossover I’ve owned since 1991, and Eclipso: the Darkness Within), I can see that at this point in the series, we’re still dealing with a brand-new superhero who is trying to figure out who he is and what is going on.  Plus, being thrown into an adventure with “the pros” (in a manner of speaking) has him all sorts of nervous and the plot of this issue is not so much a plot but Will reacting to being among the JLI and fighting alongside them, then dealing with a group called the Power Elite before the gene bomb explodes on the last panel.  For a more or less new reader, some of this issue didn’t make as much sense as it would have for someone who had been reading since issue #1, but Roger Stern’s writing was good enough and Tom Lyle’s art was dynamic enough that if this were 1988, I would consider picking up the next issue.