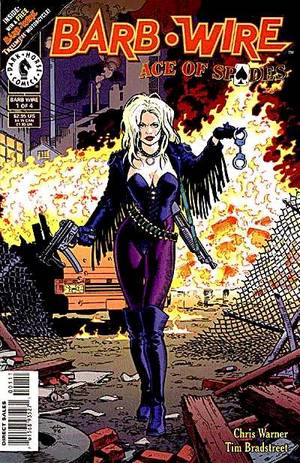 I honestly can’t remember how I got this comic.  Either it was in the box of random comics that a woman gave to me after a PD session some years ago or Professor Alan sent it my way.  Either way, I never paid for it and I’m honestly glad that I didn’t.

My love of early 1990s Baywatch aside, I never really drooled over Pam Anderson the way that a number of other guys did at the time and the release of Barb Wire was something I noticed but didn’t really care about.  Granted, the film came out in 1996 when I was in college and therefore watching Tarantino films on the regular, so my chances of voluntarily seeing it were slim to none.  Ditto for the comics.

It’s not a terrible comic book.  Chris Warner created the character and writes this and Tim Bradstreet’s artwork is really solid (and he does a good likeness of Anderson without making it too distracting).  We get Barb basically going through the underworld and beating up men and by the end of the issue, we’re introduced to a woman named Ace of Spades who looks like she might be the main “supervillain” (if you can call it that) of this series.  It took me about as much time to read it as it took for me to write this very short review because it’s not necessarily my aesthetic.  In fact, I don’t know if “biker chick” ever really was.

Find this in the cheap bins if you like motorcycles and down-and-dirty fights.  It’s not Nineties Nineties and therefore holds up much better than Brigade ever will, but I don’t think we’ll ever be talking about this as an underrated gem.