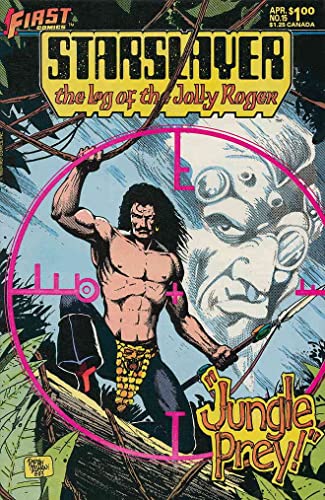 When I saw the next issue blurb at the end of issue #13 that Tim Truman was going to take over pencils, I got excited.  Oh yeah, I had been enjoying the art up to this point, but I really liked his artwork on the Hawkworld series as well as his work on The Kents, and even though this is several years earlier than both of those, I wasn’t disappointed.  I don’t think he was unknown at this point, by the way, because the house ads for the book at this time were hyping his taking over the art chores.

And as an aside, I am curious as to why First Comics–and really, a number of the 1980s independent comics companies–completely collapsed by the early 1990s.  I know that a lot of it had to do with finances and probably distribution, but seeing the output of so many companies that were not DC and Marvel during the Eighties (and that a number of these works were creator-owned) suggests to me that the so-called “Image Revolution” was not so much a revolution as it was a much more successful version of what had already been done.  I guess the high school analogy would be the popular kids coming and doing something that all of us nerds had done but never gotten proper credit for.

ANYWAY, I should get to the story.  I promise I’m not stalling here–that thought occurred to me as I was writing this.  So we start off with a woman named Chris Heyman chained up in an arena on the world of Shastus IV, on trial for owning a Dimensional Hopping Unit (referred to as a “slide slip unit”).  This is going to be a device that will become important to the Jolly Roger.  However, she’s expected to be found guilty and executed for owning such a device.  Until, that is, she gets rescued by a disguised Jolly Roger crew and helps them slide to the next dimension over and the world of Cynosure.  It’s a city world much like Coruscant in the Star Wars saga, and it’s going to become their home base because it’s where the Earth council and The Raptor won’t be able to find them.

Chris–who I have to point out until Tamara isn’t dressed scantiy but is of the “mechanic” type, wearing jeans, a leather jacket, and a trucker’s hat–joins the crew.  Unfortunately, they don’t receive the warmest welcome as cyborg police go after them.  Torin, however, goes right for them and destroys all of the police.  So their life on Cynosure isn’t going to be easy–then again, what is?

Issue #15 opens with Torin heading into a jungle-set nature preserve and hunting, which showcases the way he has become increasingly violent, even to the point where Sam doesn’t have the mindlink that he once had.  We get a story where he takes on hunters in this nature preserve while, in the background of things, Tamara tries to help him out of this jam by getting to know the locals.  The question is:  is he trying to work through something?  We know he is still distraught that he can’t return to the distant past, so perhaps he is trying to reclaim that part of his personality.

Even though he is “done” with hunting at the end of issue #15, there’s some lingering questions about the changes that his character is undergoing, and we’ll continue to see that explored as the crew understands this new world.  I also get the feeling that Ostrander and Truman are setting up a new status quo, because we have new characters appearing on the scene and the whole idea of being pursued for destroying the Earth is being set aside.  It’s not completely abandoned per se, but I can almost tell that Ostrander might think that the book is going to be way more interesting if he’s able to do some swashbuckling space exploration and adventure.  I mean, we certainly have it here, and he and Truman mix genres nicely, giving us a bit of Warlord or Arak along with our Star Wars.

So it’s a transition period, but it’s a very good one and I’m looking forward to seeing where we’re going.