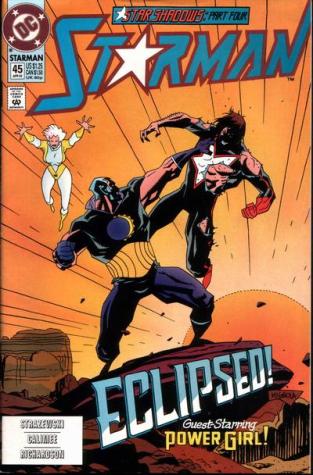 So, one of the easy parts of collecting this Will Payton Starman series was that it only lasted 45 issues and I think that I found the majority of them on the very cheap; furthermore, the issues that I am missing aren’t particularly valuable (unlike the missing Suicide Squad books that I might just buy digitally or in trade so I don’t have to buy them at a premium).  I guess that’s why I didn’t bristle at the book’s drop in quality as it moved through the back en of the run.

I’m missing issues #37 and 38 (bringing my total gap in the run to three books), so I picked up again with issue #39 and the return of Plasmax, who was the blob-like assassin created a few issues earlier.  The character wasn’t cool at all and it seems like even a number of the characters’ reactions to him was, “This guy?  Really?”, and unfortunately it led to a two-parter where Starman was in Vegas fighting against an alien overlord who was able to possess all sorts of people and things, even to the point where the casino mascots attacked him (kind of like on that Treehouse of Horror special with the Lard Lad Donuts mascot).  Now, I don’t know if the cancellation notice had been given by that point, but by the time we get to a four-parter called “Star Shadows” where Starman faces off against Eclipso, we’re in the mode of wrapping things up.

Out of all of the issues here, these were the four that I was looking forward to, probably because I thought it might actually be a setup for Eclipso: The Darkness Within, the 1992 DC annuals crossover.  I remember liking quite a bit of that crossover (although the Deathstroke and Titans annuals are pretty bad), and Starman has a major role in the villain’s defeat in the story’s climax by sacrificing himself to save everyone.  However, whereas the issues of Wonder Woman that lead up to War of the Gods are required reading if you want to actually comprehend that slight mess of a crossover, these aren’t.  They don’t serve as a reintroduction of the character in the post-Crisis DCU–he had a few here and there before this, most notably in a Phantom Stranger mini–and at best, it sets him up as a foe for Starman.

In fact, I think that at one point, they try to retcon Starman’s origin slightly to make it seem like Eclipso caused the accident that gave him his powers, but I couldn’t tell if that was the case or if Strazewski was having Eclipso take advantage of the guy with a light/star-based power set that he could manipulate into beefing himself up.  He does make for a good villain, though, and I wish he would have been brought in a little earlier than just this last arc.

As far as that arc is concerned, it comes about pretty naturally.  Will’s powers are malfunctioning, so he goes to see Kitty Faulkner to get some tests run.  She introduces him to Bruce Gordon and he and Starman head off into space to do some experiments.   Well, it’s really that Eclipso has been subconsciously manipulating Bruce into getting him to make a return.  As Gordon’s ship moves into position, they bump into Lobo–because this was a 1990s DC book and Lobo was their gratuitous Wolverine-like guest star of the time.  Naturally, Starman and Lobo fight, and eventually Eclipso is defeated by the combined forces of Starman and Power Girl.  Then, Kitty and Will share a final kiss, as if they’re going to live happily ever after.

That romance, while it doesn’t come out of nowhere because Kitty had appeared in and out of the Rampage persona since way back during Roger Stern’s run, but I feel like the speed at which it moves through the last few issues shoehorns it in so it doesn’t get left unresolved.  Plus, Will’s family is completely offloaded at this point and after he reveals his secret to his ex-girlfriend/boss Carol, she laughs at it all and then we never see her again either.  As strong as Starman began under Roger Stern’s guidance, it kind of stumbles across the finish line here.

Still, I really enjoyed this series and may see if I can track down the bookend issues of the Eclipso crossover (I had them years ago but sold them on eBay), especially since my next Starman-related read is going to be the James Robinson series, most of which I have in trade.