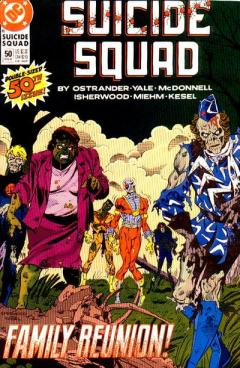 I’m going to sound like an old man yelling at a cloud here, but there was a time when milestone issues didn’t seem to happen every other month. Granted, there are some titles who premiered right around the same time as one another, so issues ending in 00 might coincide, but there are also a number of comics that seem to have their numbering tweaked just because they need a bump in sales. Furthermore, there have been a number of anniversary issues that either kick off or end some major story arc that completely disrupts the status quo for a moment.

I burned out on these in the Nineties, with Detective Comics #700 probably being the last straw. It definitely came out later in the decade than most of the overhyped and over-covered books of the speculation boom, but it still had newsstand and direct editions, some sort of cover gimmick (I think cardstock? I sold my copy years ago) and instead of being a celebration of the title’s longevity, kicked off the “Legacy” storyline, which I found rather meh. But don’t take my word for it, especially considering I haven’t read “Legacy” in more than 20 years.

Suicide Squad #50, though, came out right as the boom was picking up and right before DC hopped on the specious anniversary issue with a gimmick cover train. It sadly does not have the classic 1980s/early 1990s “Anniversary” banner that I always loved seeing (I believe that was retired after ‘Tec #627), but it is a double-sized $2.00 issue. Making it extra special is that the art teams are those of the title’s past, with Luke McDonnell and Grant Miehm getting guest art spots, and even Bob Greenberger writes a quick paragraph in the lettercolumn in celebration of the series he used to write.

But what of the story? Well, the cover looks like we’re going to get some sort of Night of the Living Dead pastiche, with several classic Suicide Squad members coming toward us as zombies and the title “Family Reunion!” It’s drawn by Geof Isherwood, and much like a number of his other covers so far is very attention-getting.

Titled “Debt of Honor,” it begins with an adventure of the original Suicide Squad, headed up by the currently deceased Rick Flag, who is leading an expedition into Cardamom mountains. They are attacked by a yeti and while Rick saves his companion Karin, another one, Jeff, falls into a ravine and is left for dead. But he’s very much alive and guts the now-dead Yeti, suing his skin as insulation before coming across local authorities. He then wakes up in a hospital without hands and a face.

Several years later, Amanda Waller is in the hospital room of someone named Carmichael (and I’m trying to remember who this is and why he’s there but I’m drawing a blank) when she receives word that Rick Flag’s son Richard has been kidnapped. We cut to that scene, where he is captured by some zombie-looking creatures that call themselves Koshchei the Deathless. It’s pretty obvious that the leader of this gang is Jeff, as he flashes back to the Korean War when Rick Flagg more or less became his mentor.

Back at Squad HQ, we get the briefing that Flag never knew he had a son–Karin never told him she was pregnant–and their mission is to get him back. Bronze Tiger volunteers and it becomes obvious that they’re going to have members from the classic lineup in this book. Waller recruits Nightshade and Nemesis, the latter of whom impersonates Flag so that he can confront Jeff and get the kid back. Meanwhile, Nightshade joins Bronze Tiger, Deadshot, and Captain Boomerang on the strike team.

Jeff captures Nemesis and gives his whole backstory, which involves all sorts of Winter Soldier-esque cybernetics and other enhancements. He has a hand in helping create the Jihad, works on the Rocket Red soldier designs, but then is almost killed when a team led by Flag raids his facility and blows it up. But now he is in a decaying body with a fully functioning brain–essentially a zombie. So he creates zombie followers.

The Squad arrives and we see that Enchantress is alive inside of Nightshade–so we have the original Squad here–and when Jeff learns that the Flag he has captured is Nemesis, he decides that he’s going to take all his revenge out on the Squad and the kid. As expected, there’s a fight, complete with the return of Ravan in zombie form, who fights Bronze Tiger. Nemesis winds up appealing to Jeff’s love of Karin and gets him to let the kid go … if Nemesis can get out of his base before he blows the whole thing up.

This is a really satisfying issue. Yes, the cover is misleading because the Squad themselves don’t get zombified, but I frankly didn’t care about that because we had a chance to see old characters and some connective tissue was thrown in regarding the villain in a way that was very plausible. Usually, the “I was behind everything that’s happened to you” retcon doesn’t work but here it seems like Jeff’s work for the Soviets, the Quaracis, and whomever else he is used by is coincidental and because these were two countries that the Squad encountered via Cold War-driven circumstances, it makes sense that they’d cross paths. Plus, the action is awesome. I mean, what isn’t cool about taking out zombies?

The mix of artwork was also a bit of a risk–I’ve seen a number of comics from this time where different art teams took on different portions and the changeovers were jarring (the New Titans and Deathstroke annuals from the Eclipso crossover are notoriously bad in this way, to the point where Nightwing’s costume changes throughout)–but it’s great here. Yes, I can see the differences between the different art teams but they aren’t jarring and don’t take me out of the book.

While this was an anniversary issue, I did find it for pretty cheap and I do recommend grabbing it if you see it. I mean, even if you aren’t familiar at all with the characters, John Ostrander and Kim Yale give us enough introduction to each of them for you to get familiar really quickly. Plus, it works as a great single-issue story, and that’s something that would become increasingly rare as time went on and multi-issue storylines became the comics norm.