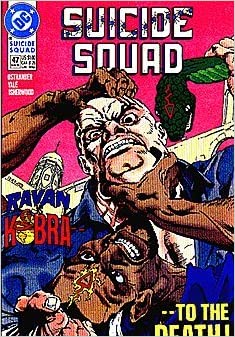 After The Phoenix Gambit re-established things and gave the book momentum, the creative team of Suicide Squad had the unenviable task of following it up in some way. Now, I suppose they could have gone for the next bannered storyline, which is what writing for the trade would get us about ten to fifteen years later (it seemed like every title had a bannered storyline for a while), but instead they decided to go back to the episodic style with running subplots that have worked since the beginning of the series, starting with a focus on Captain Boomerang.

Boomerang, who is given the nickname “Boomerbutt” throughout the series, is probably one of the better developed villains and was also one of the most recognizable because of his long-standing history as a member of one of Flash’s Rogues. In Suicide Squad, he’s kind of been the screw-up of the group, way more pathetic as a “villain” than he ever would be effective, and I can see where he would spiral into the desperate situation he’s in when Brad Meltzer writes him in Identity Crisis. In issue #44, Deadshot accompanies him to Australia for his father’s funeral and we get a back story that sheds a lot of light on why and how he is who he is, an issue that allows co-scripter Kim Yale and artist Geof Isherwood a break to possibly set up the next three issues, which are a Middle Eastern action story involving the cult of Kobra.

The Boomerang story is all right and has some nice character beats while also introducing, at least briefly, the new Atom (something that will be fulfilled about a year later), but the highlight of these four issues is the final resolution of the ongoing conflict with the Jihad. It happens via Kobra, with whom Ravan has a spiritual connection and conflict, ultimately resulting in his sacrifice for the greater good.

Kobra’s a villain that seems to be right out of a Marvel comic, to be honest, because he’s a religious cult leader with a paramilitary organization (similar to Brother Blood), and we’ve seen enough of Hydra and A.I.M. over there to know this is a trope. The stories I have read featuring the villain and his cult have usually been Batman-centric and I’ve enjoyed them; here, he’s plotting to bring about all sorts of chaos and is trying to play “chessmaster”, which isn’t as effective as he thinks it will be. The conflict with Jihad has been one of the better on/off conflicts so far, and it was great to see this ultimately resolved.

I continue to wax this series’ car because even when there’s an off issue (and #44 is kind of that), it’s consistently solid. I’m coming up on another gap in my run–two very important Oracle issues that go for more money than I’m willing to pay–and as I go through this series, I’m going to start contemplating buying the trades to fill in the gaps or replace the comics.