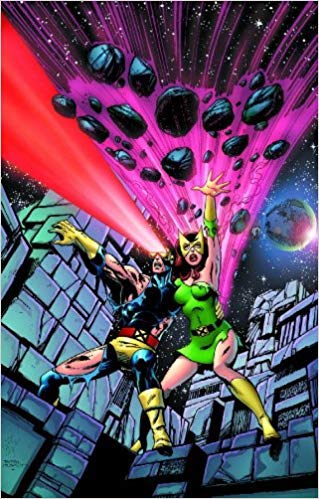 I guess the most obvious thing to say is that the Chris Claremont/John Byrne run is probably the most celebrated run on  Uncanny X-Men. Not that there aren’t others that are held up in high esteem by readers who are more more experienced X-fans than myself, but the run that encompasses both the Dark Phoenix Saga and Days of Future Past is definitely at or near the top of the list. And I guess the most obvious question to ask is: does it live up to its reputation?

The run starts toward the end the first volume of the essential X-Men collections, which in itself is a great collection of stories.  I had made my way through all three of the “Classic X-Men” Essentials and wasn’t really that impressed with them (and decided not to review them for the site, even though I am keeping them), but Len Wein, Chris Claremont, and Dave Cockrum breathed new life into this book immediately with Giant-Sized X-Men #1.  Those stories are dynamic and fun to read, and when Byrne comes on board it gets even better.

This particular volume is where you see the creative team hit its stride.  Unfortunately, it’s also where you see it come to an end. I know that egos and creative differences were the reason for the breakup (as opposed to the end of another famous team run, over at DC, the Wolfman/Perez New Teen Titans, which ended amicably), but I did my best to put that aside when reading it. Besides, this is near my comfort zone for these books because during my X-phase in the early 1990s, I did pick up copies of Dark Phoenix and Days of Future Past in trade (the latter being a very slim volume only collecting the two issues).

What surprised me about this essential volume was how good it was. I mean, I went in expecting quality, but there are times when something is held in such high regard, you feel pressure to like it and put it on the same pedestal. I kind of felt that way about the Lee-Kirby books until I realized I wasn’t alone in thinking that their run on X-Men was lackluster and it wasn’t until the latter part of Roy Thomas’ run, when he worked with Neal Adams and Jim Steranko, that the title really began to get good. Plus, I’d already read the greatest hits, so now I was getting into the album cuts. Were they going to be good?

Oh yes. Very much so.

I won’t go too much into the weeds on the stories in this volume, except to say that there are a couple of outstanding Alpha Flight team-ups/fights, and a great three-parter where the team fights Proteus (son of Moira McTaggart) just before the beginning of the Dark Phoenix Saga. What I will say is that because I’d only read that particular story in the trade that Marvel put out in the late 1980s/early 1990s (it reprints #129-137), I didn’t realize how far back Claremont and Byrne had seeded Mastermind and the Hellfire Club’s takeover of Jean Grey. I also didn’t realize that Wolverine’s future fiancee, Mariko, was introduced so many year before the wedding in #172.

I never saw the film version of Dark Phoenix that came out earlier this year–it didn’t look very good–but reading this, I realize why movies like that tend to fail. Claremont and Byrne are so good at serial storytelling, they give us a season or two of a quality television series rather than a cinematic experience. Between the “birth” of Phoenix in issues #100-101; her saving the universe in #108; and then her taking time off followed by her return to the team, eventual corruption, and death, they allow their story time to breathe and develop rather than feeling they have to shove everything into a couple of issues. It’s not decompressed storytelling by any means–the amount of dialogue and thought bubbles that Claremont shoves onto a page prevents it from being that–but it does not assume that the reader might not pick up the next issue either. I only wish Marvel had been better at collecting these back in 1992 when I was buying the trades because even back then, many of the issues in this run (and even in the Classic X-Men reprint book) were hard to come by or expensive.

Now, I stopped reading the book after issue #138 and took the time to read both the Phoenix: The Untold Story one-shot that I’d bought at a convention a couple of years back as well as “What if Phoenix Had Not Died,” which is one of the more classic issues of the original What If …? series from the early 1980s. “Untold Story” reprints the original version of Uncanny X-Men #137 wherein Jean is simply depowered, something Jim Shooter wasn’t having. It’s … okay at best and the published version was significantly better (plus it’s a Baxter paper reprint, which isn’t the best for the coloring). The best part of the issue is the interview with Claremont, Byrne, Shooter, Jim Salicrup, Terry Austin, and Louise Jones (Simonson) because it’s a solid inside look at how everything went down.

The What If …? story is a little rushed–they spend a little too much time recapping the story that actually happened–but is still worth reading. Mary Jo Duffy and Jerry Bingham take the originally intended ending for #137, have that happen, and then basically say that the depowering would never have worked and Phoenix would have laid dormant inside Jean Grey until strong enough to take over and … well it doesn’t end well. I got this book on the cheap and it’s in very, very crap condition, but What If …? has been reprinted in a trade that may still be in print.

In fact, all of what I am reviewing is out of print. Marvel switched from Essentials to the much more expensive Epic Collections a number of years ago, but there are Essentials floating around comic shop cheap shelves and this one tends to be readily available (I purchased it for $5). It’s completely worth it, even in black and white (something I forgot to mention and I should also mention that Byrne and Austin’s art is fantastic in B&W). You don’t need the “Untold” special, but it is a nice historical artifact to have.

All of it, though? Worth its reputation as classic comics.