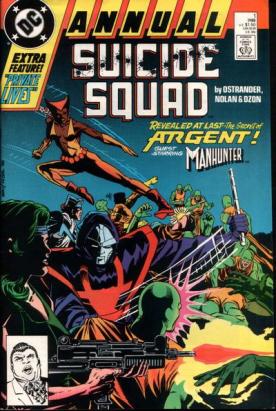 I’ve always thought that annuals can be a big letdown. Granted, my high-water mark for annuals are the New Teen Titans annuals of the early 1980s and G.I. Joe Yearbook #3, so I may have set the bar a little too high. But throughout my comics collecting career, I’ve read a lot of annuals that felt like they were produced out of obligation, were a place to dump an inventory story, or were the venue for a fill-in artist who is not nearly the caliber of the series’ regular artist.

That long-winded intro is a way for me to say that I figured that the first Suicide Squad annual would be most of the same. It’s from the late 1980s where these annuals were mostly filler and had extra features that weren’t usually worth the money you were paying (in 1988, it was “Private Lives”). But the new penciller for this one is Graham Nolan, whom I’ve been a fan of through his Hawkworld and Detective Comics work, so I thought that maybe … just maybe … this is an exception to the comics rule.

“Ghosts and Shadows” is a story about a “deep state” sort of conspiracy where someone or something named Argent has been influencing things in the background since the end of the Golden Age–which is where we begin the issue, with the Justice Society refusing to unmask for HUAC. We then get the founding of Task Force X, whose head is named “Control.” This leads to the operations of the original Suicide Squad and Control being a man who has influence within the halls of power, and then going deep underground after he quietly takes down the people behind the JFK assassination conspiracy.

Fast forward to 1988 and Control is the object of the new Suicide Squad’s latest mission, as they are being briefed by his granddaughter, who tells them that Control has been impressed with their actions in the last year or two. Of course, she’s not completely on the up and up and as we get a team-up with Manhunter where they take on the Kobra cult, we have double-crosses and the efforts of the old guard to keep and maintain their power.

It’s a tight story that runs slightly longer than a regular issue and is as well put together as the Doom Patrol team-up special. The groundwork is laid out well for the conspiracy, Kobra winds up being a pretty good group of villains to take down as well as a nice “We’ve been set up!” surprise, and the way Waller both sends the Squad in and takes care of contingencies is very Mission: Impossible. Plus, the “Private Lives” backup is about Waller and her family, which gives her even more depth; clearly, she’s one of DC’s best post-Crisis characters.

Not only that, but this annual is one of those stories that you could hand to someone who has never read this run of Suicide Squad and say, “This is a great entry point.” You don’t really need to know much about what was going on in the book prior to reading it, and you don’t need to know who the characters are (though it doesn’t hurt). Ostrander gives just enough background without over-explaining everything, and while Graham Nolan is not as strong as he is when he is drawing Batman in the 1990s, his pencils are still great and holds up well even to the excellent artwork that Luke McDonnell is putting in on the book.