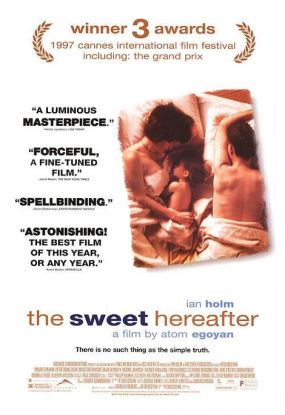 Another movie off of my Netflix DVD queue and another movie I don’t remember adding to it in the first place or why.  Perhaps it was mentioned in an AV Club post or by somebody on YouTube.  At any rate Amazon had The Sweet Hereafter available for streaming on Prime, so I sat down and watched it.

Ian Holm plays a lawyer named Mitchell Stevens who has arrived in the small Canadian town of Sam Dent, British Columbia, which is still recovering from a tragic school bus accident that claimed the lives of many of the town’s children.  Surviving the accident were the driver, Dolores Driscoll (Gabrielle Rose); and one of the teenagers, Nicolle Burnell (Sarah Polley), and he begins working with them to get a class-action lawsuit going to show that either shoddy construction of the bus or a highway guardrail caused the accident, as the bus had slid off the road and over a ridge before skidding onto an icy lake and falling into the water.

Mitchell’s presence causes divide among the people in the town to whom he talks about the accident, with some wanting to go ahead with the lawsuit and others wanting him to leave them all alone. The conversations he has and his efforts to build the case are interspersed with flashbacks to the accident itself as well as a flight where he sits next to Allison (Stephanie Morgenstern), an old friend of his daughter Zoe (Caerthan Banks).  Over the course of the flight, Mitchell tells Allison that Zoe has drug problems and we see flashes of the number of times she called him and he dealt with her rather incoherent ramblings, although in one of them she reveals that she has tested positive for HIV.

The film is from 1997 but aside from a couple of small details (Mitchell’s cell phone, for example), it feels as if it could have been shot or taken place right now, and it is well-shot and well-acted overall.  But tragedies involving children can be hard to swallow in movies and while I definitely think it was a good film, it’s not one I’d revisit.  Atom Egoyan obviously took some care in creating the situation that he wanted in the film, but there are points where this is almost too deliberate of a movie and a couple of the plot twists, while they seemed to make sense for the film, sort of came from nowhere and didn’t have much context.  Not that I don’t need everything in a film explained to me, but there were a few moments that lost me.

So while I understand that this is a good movie, I didn’t necessarily like it, which I guess is a fair and logical assessment of something.