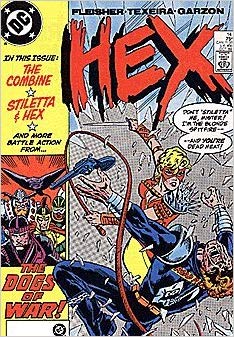 If I am to give credit where credit is due, it’s my early years of comics collecting where I was buying all of Crisis on Infinite Earths and as many of its crossovers as I could that got me slightly interested in Hex, the post-apocalyptic sci-fi series that was the follow-up to the Jonah Hex book that had spun out of Weird Western Tales in the 1970s and run for 92 issues.  I also distinctively remember a moment in The History of the DC Universe where they mention that “now he fights in a future gone mad” and Who’s Who entries that featured a few of the characters, so at the time I thought that people might have considered it important and it was essential DC 1980s reading (see also: Atari Force).  At twelve or thirteen years old, I obviously didn’t know from hype machines.  I was interested back then but never really grabbed any issues when I found them because there was always another Teen Titans book to pick up, so Hex sat collecting dust in someone else’s cheap boxes and my memories.

Fast forward to a few years ago when I grabbed an issue for my “80 Years of DC Comics” podcast series and then started coming across some of the series in fifty-cent bins.  There are only 18 issues in the entire series, so I decided to grab what I could find at the time and wait to read them when I finally got everything collected.  Well, then this project hit and I decided to figure out whether or not I’ll keep looking for the series.

I don’t now if Hex has a good reputation.  I got the feeling from the few passing comments I’ve seen from Jonah Hex fans that it’s not something they very much like because they prefer the character’s classic old west stories.  This is a little bit Mad Max a little bit Blade Runner as the future doesn’t seem to be a wasteland but is more of a weird mix of dystopian science fiction and action-adventure, a mix of stuff we saw in 1970s films as well as what was coming into popularity in the 1980s.  Michael Fleischer’s scripts are fun and he’s trying to build a world around the time-tossed Jonah Hex; and the early work of Mark Texeira is really solid (I bought some issues of Wolverine in the Nineties just because he was drawing them).

I will admit that skipping through the run made it a little hard to follow, though I got the gist of it.  Jonah Hex seems to still be an outlaw in this time and is fighting against an oppressive government and other entities and has some allies such as Stiletta, who out Eighties the Dreadnock Zarana if you can believe it.  The issue with Batman is a really good one as well because it’s an early attempt at what we would eventually get with Batman Beyond (though no Bruce Wayne is involved here), and even when I thought that this didn’t need to be a Jonah Hex comic and could have been any character, it was pretty entertaining.  A slight downgrade, by the way, for later issues being printed on that mondo paper–it never looked good.

Anyway, I don’t have much of this series left to get, so I think that it will definitely be worth the dive into the bins and then I can decide whether or not I want to keep them or sell/donate them (although my copies are mostly in pretty poor condition, so I don’t know if I’ll get anything for them).