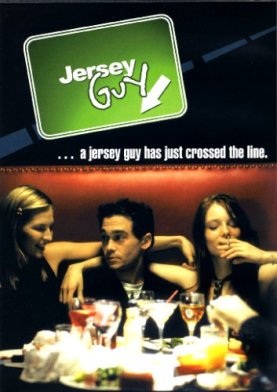 Is it embarrassing to say that I only saw this movie because one of the actress in it was one of my first “celebrity crushes”?

Some explanation, I guess.  I started watching Degrassi Junior High when I was in fifth grade and kept up with it almost to the end–when WNET 13 moved the show from its after-school lineup to Sunday mornings, I mostly missed it due to being dragged to religion.  And in that time, the storyline I focused on the most was the on-again, off-again relationship between Joey Jeremiah and Caitlin Ryan.  Was it because I was a shipper and they were my OTP?  No.  It was because I had a major crush on Caitlin. Fast-forward to the late 1990s and early 2000s when I am able to go further down the internet fandom rabbit hole and not only indulge my nostalgia for ’80s Degrassi, but also hop all over IMDb to see what those actors and actresses are up to.

And that’s how I found Jersey Guy, a film written by Christ and Elia Zois and directed by Elia Zois and starring Steve Parlavecchio as Jack, the titular Jersey Guy who is 25 years old, working as an administrator in a nursing home and still dating his high school sweetheart, Susan (Stacie Mistysyn, Degrassi‘s Caitlin).  Both he and Susan still live at home and it seems like they’re on the verge of getting married because they seem to already be an old married couple.  Jack’s restless and one night goes to Manhattan where he meets a model named Samantha, with whom he begins an affair.  While the guys he works with at the nursing home seem to be impressed by this, he’s definitely conflicted and that crisis of conscience (or “quarterlife crisis,” which was a term around the time this movie was released) drives the rest of the plot.

Is it worth it?  Well, like I said, it’s independent as independent can get.  All of the actors– except for Mistysyn and Arthur Nascarella, who has had a long career playing both police officers and mobsters–are relatively unknown, and the movie looks like it was shot on a very low budget.  That works in its favor because much like another famous independent film set in New Jersey, Clerks, it looks like it takes place in the real world, as opposed to a facsimile version of the New York area.  The script also doesn’t suffer from the problems that a worked-over script for a romantic comedy/twentysomething film suffers from, which is dialogue that seems manufactured or characters who seem too self-aware (I love St. Elmo’s Fire, Reality Bites, and Singles, but they definitely have this flaw).

However, this also works against it because much of the acting isn’t as polished as it could be, and there are points where the bits about Jack being from New Jersey and being a “fish out of water” in the world of NYC come off more like a tired stand-up routine.  Plus, while Parlavecchio does a good job of carrying the film, I wish they had given Susan a little more to do, because she’s a good character, especially in this late 1990s/early 2000s era of romantic comedies featuring shrewish and wet-blanket girlfriends.  Yes, she tends to give Jack a hard time about the length of their relationship (and lack of an engagement), but it’s in a way that a longtime friend or significant other might give someone else a hard time.  Moreover, the two have some good chemistry.  I would have loved to have seen more of the two of them; granted, it might have made Jack look worse and in that case I would have been rooting for him to get dumped by both women in the movie.

Still, being from Long Island, I could relate to both the characters and the situations.  Like I said, despite the film’s flaws, much of it seemed very real and in these characters, as if they were people from my hometown.  I left feeling that it was a solid 90 minutes and actually wondered what happened to these characters after everything ended.  I mean, we get an ending, but in my mind, their lives went on.  I think that’s the mark of a good flick.

*If you can find it.  I put this in the Netflix DVD queue years ago, but it was always listed as a “Very Long Wait,” and when I was recently reordering the queue and saw that the movie was available at-the-ready, I moved it to the top.  I don’t think it’s on streaming because it definitely could benefit from it.  If you have access to a DVD rental and can get it, check it out.