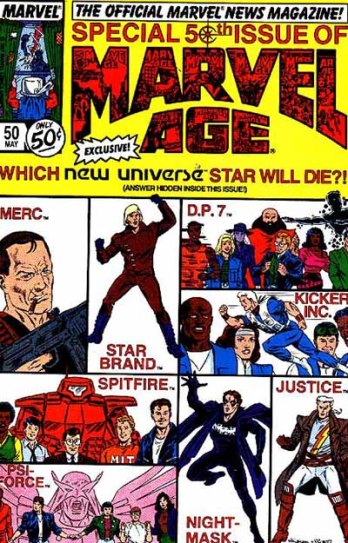 If there’s anything that is indicative of this accumulation disease that I have, it’s the fact that at one point, I needed to seek out a few issues of Marvel Age for use in both “In Country” and my 2017-2018 podcast miniseries “Origin Story” and that eventually led to me just grabbing an issue of the series out of a bin any time I saw one.  And beyond collecting G.I. Joe and The Transformers in 1987 and all of the X-Men titles for a couple of years in the early Nineties, I’ve never been a huge Marvel collector.  So how and why did I wind up with twenty-one issues?

I think that my motivation was being interested in Marvel in the 1980s, and while I have recently read some Eighties Marvel (some of Walt Simonson’s Thor, for example), I don’t have the means to read everything I want to right now (and yes, I know … Marvel Unlimited.  It’s kind of a reward I’m working toward as I unload comics), but I could do the Eighties Marvel version of “watching TV by reading TV guide.”  And here’s what I got:

It was a long journey, a lot of articles, and a lot of Fred Hembeck cartoons.  A number of the articles were obvious hype but were good hype of series that I wasn’t too familiar with (I am going to track down a few of the series that looked interesting).  There was also a lot of hype for various New Universe titles that I was never interested in and only really know for it being an enormous misfire.

There was also a lot of nostalgia inside those pages.  I’d look through the coming attractions and not only see what was on the stands, but think about what I might have been reading (usually a random G.I. Joe issue) and what I missed because I had interests elsewhere.  I also felt like I was getting a good feel for what Marvel was like throughout the Eighties and into the early Nineties because since these issues encompassed the better part of the decade, I saw the change in tone when it came to the company’s books.  By the time I got to the last issue, even though the Hulk was drawn by George Perez, it still looked like the flashier stuff I’d been seeing in 1992 as opposed to what I had personally deemed “classic Marvel” of the 1980s.  Granted, that’s probably because when I was a kid in the 1980s, those books were a little beyond me and the Nineties books were aimed right at me.  But I still got the feeling that I was watching the company–and by extension, comics–change over the course of these issues.

I’m told there is actually a market for some of these.  I do know my LCS has one issue, which has some early Black Costume Spider-Man designs in it, on the wall for a decent amount of money.  I figure that most of the ones I’ve got here are worth about a dollar or maybe less (based on their condition–they were all fifty centers and some show it).  So I’ll see what might I might be able to get.