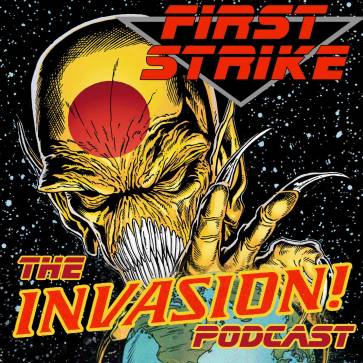 Invasion! was a DC Comics crossover event that I wasn’t present for and out of the four that were published before I jumped on with Armageddon 2001 in 1991, it was the one I probably read the least when I did own the issues back in the 1990s. I thought it was fine but was more interested in searching the back issue bins for issues of and tie-ins to Crisis on Infinite Earths, Legends, or Millennium.

It’s not that I didn’t like the series; in fact, I thought it was pretty cool. It’s just that for reasons unknown, I never got as fully invested, and by the time I could afford to hunt down all of the back issues, my priorities were elsewhere. But a few years ago, I found the trade paperback in a $5 bin and couldn’t pass that up, and when I heard promos for this show on various Fire and Water podcasts, I decided that I was going to buy up as many of the tie-ins as I could and then would read along with the entire thing!

That fell by the wayside really quickly and then the show just sat in my library for the better part of a couple of years, racking up new episode after new episode until I finally decided to listen to the entire thing all the way through this year. And I sort of held to my original commitment–I read the three issues of the main series as well as whatever tie-ins I owned right before listened to their episodes.

While Invasion! does have its flaws, Siskoid and Bass and this podcast don’t. They don’t just cover every issue and tie-in of the Invasion! crossover, but they take time to look at issues that should have been bannered as crossovers that weren’t, what else was going on in the DCU, and even the Invasion! parody Uncanny X-Men #245 (an issue I once bought just because it was a parody of the crossover). They’ve also got a great rapport with one another and genuinely come off as two longtime friends who are inviting us to come in, sit down, and talk comics.

Even if you haven’t read the series or any of the books that they talk about, you should still listen to this–and honestly, that’s one of the highest compliments I can give any comics podcast.

Worth Subscribing, Worth Trying, Waste of Time?

Worth Subscribing (or in this case, downloading the whole thing and listening all the