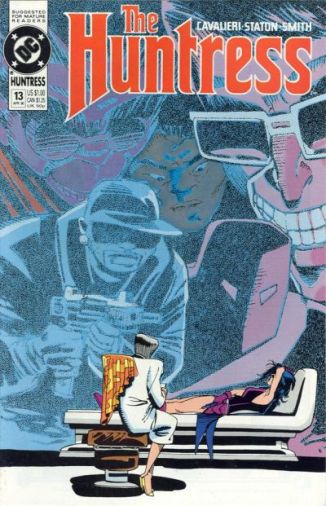 After two six-issue storylines, we get a one-and-done story where Helena Bertinelli is dealing with the fallout from everything that she has been through with her family, the mob, the serial killer, and the mob.  It’s presented at the very beginning as her being pulled in two different directions and literally being torn apart in a nightmare.  Helena then saves a woman from being brutally raped and takes her to a local community clinic whose on-call psychologist is Dr. Rosen.

The nightmares are enough for Helena to begin seeing Dr. Rosen, which is something that we’ll see play out in the next storyline, a three-parter in issues #14-16.  It also helps provide her character with motivation beyond trying to avenge her family’s murders or clean up the mess that her father left behind. She starts by taking out the gang that was about to rape the woman earlier in the story.

One of the tough things for a superhero comic to do is make quiet, non-action moments not only readable but interesting.  I may be speaking out of my ass here, but I have always thought that much of the burden for that winds up falling on the artists more than the writer.  I’ve seen some really good low-key stories and scenes ruined by subpar artwork; thankfully, Joe Staton and Bob Smith are more than up to the task.  The back and forth between Dr. Rosen and Helena–who doesn’t reveal her true identity–is well scripted and well drafted, and if I have any quibble with the art, it’s that I think that they draw Helena as a bit too old when she’s not in costume.  I understand that in real life, she’ll dress conservatively and inconspicuously, but there are times where she tends to look like an old Italian woman.

But that’s a quibble.  This series continues to surprise me in terms of being of solid quality.  Cavalieri is creating a character who is very much her own version of The Huntress and I’m looking forward to seeing where he goes with the next storyline.

*As mentioned in previous posts, I’m waiting until I finish the series to make an ultimate decision.