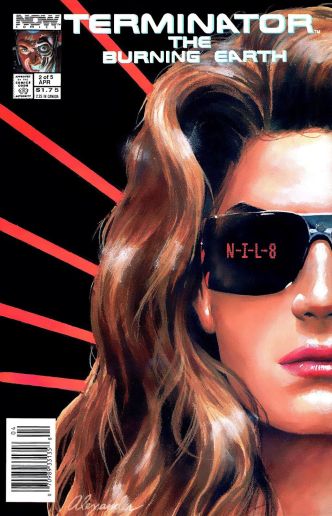 Wrapping up the continuity of Now Comics’ Terminator books is this five-issue miniseries that is known for being the first published work of a young artist named Alexander Ross, or as we all know him, Alex Ross.  Now, I admit that I bought this on eBay back in 2019 for a total of $9.52 (including tax, shipping, and a $5.00 coupon), so I paid roughly $2 per issue, which goes against what I had said about the 17-issue ongoing.

Sadly, I should have trusted my instincts here.

While the historical aspect of this book makes it notable and Ross’s artwork is definitely better than what we would have seen had the previous series’ artists been on the book.  It is a bit rough, though I think anyone can excuse that considering this is when he was still very much a greenie.  It’s very dark in places with a lot of black tones, and while there are points where it’s pretty muddy, Ross does a great job of making the Terminators and Skynet look cold and even scary.

With that quick evaluation of the artwork out of the way, what’s the story like?  Well, this apparently carries right from the series or at least stars some of the people from the series, among them being Tim Reese (Kyle’s brother), and John Connor (of course).  We are in Los Angeles and Skynet (whose point of view we get in issue #2) has decided to make a final push to eradicate what is left of humanity by gathering its remaining nuclear stockpile and dropping it on the remaining cities.  The resistance sees that this is the time to make a final assault on Skynet headquarters, which they’ve nicknamed “Big Thunder Mountain”.  The assault takes place as the hunter-killer drones are flying to various cities and manage to destroy both Houston and Phoenix, but the humans wind up taking out the CPU and shutting it all down … or do they?

There’s some really good stuff in this story, especially the first-person narration by John Connor in issue #1 where he is so tired of the war and seeing so many people die that he is near suicide.  That issue takes place a decade after the ongoing series and I can see how he might reach that point if they’re continuously losing.  But then there’s superfluous Terminator stuff, including a Cindy Crawford-looking female Terminator called “Aurora”.  It’s an interesting concept–and one we’d see in Terminator 3: Rise of the Machines–but aside from giving us some T-based violence and a woman version of the original movie poster for a cover (probably the most eye-catching cover and one I’m pretty sure I remember seeing on the stands back in the day), it doesn’t do that much for the story.  It falls very short in a number of areas, to be honest and lines up with the other cheap bin finds that Now published with the franchise.

Still, I’m going to hold onto this while I finish up collecting the entire Now run and will probably read and review them all thoroughly at a later date.