Don’t ask me why I decided to pin a bunch of ghost stories to my Kanopy watch list, but it seems like I’ve got horror on my mind.  Maybe it’s because of the way the world is going to complete shit this year and I need to see something that feeds my current pain or something.  Or maybe it’s because they’re available for streaming and I am glad I don’t have to go out of my way to pay actual money. 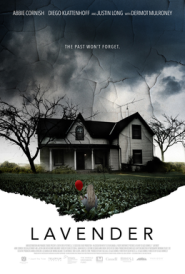 The two movies are 2016’s Lavender and 2011’s The Awakening.  Both, in some way or another, feature female protagonists who, over the course of the film, piece together something about their fuzzy pasts while visiting a place that seems familiar but they can’t figure out why.

In the case of Lavender, it’s when Jane (Abbie Cornish), a photographer suffering from amnesia, keeps returning to a random farmhouse that apparently is hers and begins to see what appears to be the ghost of a little girl.  It’s heavily implied, too, that perhaps Jane had something to do with her death because at the very beginning of the movie we have a little girl being the survivor of some horrible tragedy, perhaps a murder (it’s very Halloween).

By contrast, The Awakening takes place at an old English mansion that is now a boarding school but looks like it very well could have been the setting of a Bronte novel and stars Rebecca Hall as Florence Cathcart, a “ghost hunter” who is famous for debunking hoaxes and revealing scams.  In her case, she’s been asked to investigate a series of supposed hauntings that caused the death of a child, a maguffin that leads to a ton of revelations.

Both of these films have their moments, and are honestly much better than they deserve to be due to their leads’ performances.  Because honestly, there are much better “ghost story as a way to recover trauma” stories out there. Plus, when the cat is out of the bag and all is revealed to each film’s protagonist, things get pretty contrived.  Neither film is able to overcome the effects their filmmakers are using to try to make them look better–very deliberate shots, graying filters, overwrought scoring–and that puts them each in a second-tier in this genre.

Okay, I’m not an expert in this genre by any means, but I can say that these films’ flaws didn’t stop me from enjoying them.  I was pretty invested in each of them and thought that they got a fair amount of the suspense building correct and didn’t try to overdo it with special effects or jump scares (although there were a few of those).  As far as library checkouts are concerned, they’re a good low-risk choice.

Watch, but you’re not missing anything if you skip them.