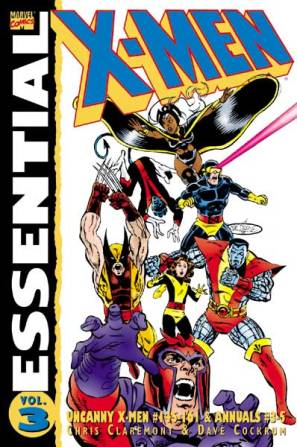 With John Byrne off the title after the “Days of Future Past” storyline, Chris Claremont begins what will be a long continuous run of writing the X-Men with a rotating lineup of artists with these two volumes featuring the return of Dave Cockrum as well as Paul Smith’s short tenure as artist and the first time John Romita Jr. handled pencils.  These are portions of the X-Men’s history that I was pretty familiar with because my friend and I read a ton of X-Men back issues in the early 1990s, including a number from this era.  Some of them, by the way, were pretty easy to come by because not everyone was after the second Dave Cockrum run on Uncanny as much as they wanted early Jim Lee artwork.

These stories tend to be a bit of a mixed bag at times and are not as tight as the Claremont/Byrne stuff.  Then again, that might be due to my preference for not having the X-Men in space.  And they seem to be in space quite a lot during these two essentials, either fighting alongside the Starjammers or battling The Brood.  Now, the first Brood storyline is a pretty good one, especially because Paul Smith does a lot of the artwork and I personally think he’s one of the most underrated artists the X-Men ever had.  I could take or leave the Starjammers, though.  Sure, I like space pirates–I certainly enjoyed the run of Starslayer that I worked my way through at the beginning of this summer–but having them be such a focus of Marvel’s mutant books got very tiring.

[Quick aside: the X-Men would team up with The New Teen Titans right after the Brood saga was over; this coincided with the end of the Titans’ first outer-space adventure on Tamaran, a story that looked gorgeous but was not as intriguing as the more “down to Earth” storylines.]

When the books came back down to Earth, they got better.  These issues feature the introduction of Madeline Pryor as well as Wolverine’s wedding and the debut of Storm’s “punk” look.  All three serve the book pretty well, even though I think the use of Japanese culture with regard to Wolverine has not aged as well as fans of the character think it has.

That being said, they’re still great comics and I can tell why this was the biggest comic book  at the time.  The artwork translates to black and white very well, and I only have two quibbles.  First, the graphic novel God Loves, Man Kills is included but because it was a painted graphic novel, we get what is essentially a photocopy of Brent Anderson’s art.  I’m not too upset about that considering I own a copy of that graphic novel in full color.  A little more annoying is that between the books, Uncanny X-Men Annual #6 was not included.  That, probably has to do with the fact that I have an earlier printing of essential volume 3 and a pretty recent printing of volume 4.  I owned that comic book at one point, too–it’s the X-Men versus Dracula and is outstanding.  But that’s a small quibble and one I might be able to remedy if I decide to seek out volume 3 and swap it out for a newer edition (but only if I can get it on the cheap).

These continue to be worth the $5.00 I spent on them at my LCS and I’m looking forward to seeing how the story continues, especially as we get into the mid- to late-Eighties, a period that I know was a bit of a slog at points.