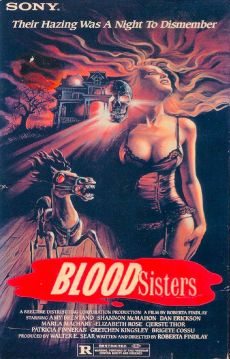 So New Jersey has a pretty good track record when it comes to independent, low-budget movies and when I saw someone on social media link to this very random low budget horror flick from 1987 released by Cannon, I was intrigued.  I mean, I love a good shitty horror movie and Cannon=boobs, so … good, right?

I mean, seriously.  Look at the VHS box on the right.  How can you not be at least curious about this?  There’s lingerie, skulls, demonic horses, red skies, a pun … even if it was of the lowest, homemade quality, it should be fun as hell.

Oh man, this was just bad.

So bad, in fact, that I couldn’t find it anywhere on any of the streaming services I pay for and I had to watch in on YouTube where it had been ripped from someone’s low-quality VHS copy.  Although, honestly, that was one of my favorite things about this because it gave Blood Sisters the feel of late-night high school basement viewing.

The movie was written and directed by Roberta Findlay and borrows elements of a number of other horror movies from the decade, from the killer’s POV of Friday the 13th to the “kid killing people at the beginning of the movie” from Halloween and the “spend a night in a haunted house” plot from … well, a number of movies.  As part of a hazing ritual for a sorority, a group of pledges is required to spend a night in an old house which is supposedly haunted.  Granted, the “haunted” is a bunch of silly pranks set up by the president of the sorority and their fratbro friends, except that the house actually is haunted.

As we see in the beginning of the movie, it was a house of ill repute a couple of decades before and was the sight of a bunch of grisly murders.  Now, as the girls are there, they start seeing the ghosts of the prostitutes who once worked the brothel and at points even seem to be possessed by their spirits.  But the main danger is that some slasher–more than likely whomever killed the girls at the beginning of the film–is killing all of them off.

Nobody from this film went anywhere after it was released, and while the director is known for exploitation flicks, Blood Sisters doesn’t seem to come off as anything that might qualify as a cult film.  You can watch it for free on YouTube, but I wouldn’t.