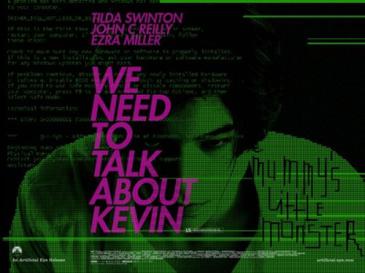 Sitting somewhere in a mental queue and eventually knocked off of my Hulu list, We Need to Talk About Kevin is a movie that I was always interested in watching but at the same time didn’t exactly want to see because of my job as a high school teacher.  I guess that’s why it took me four days to actually get through it.

If you’re not familiar with the film, it’s based on a 2003 novel of the same name and follows Eva (Tilda Swinton), the mother of Kevin (Ezra Miller), who is serving time for committing a school shooting.  It’s been about two years since the shooting took place (and while we don’t know all of the details of that shooting until the end of the film, the imagery we see early on in the film doesn’t hide that it is one) and she is a pariah in her community.  She’s lost her career as a well-known and admired travel writer/author, her very nice house in the suburbs, and her marriage.   She’s reduced to working in an administrative job at a travel agency, gets verbally attacked by the parents of her son’s victims most any time she goes out in public, and even has her house vandalized with red paint, something she spends the entire film trying to clean up as if she’s Lady Macbeth or something.

Interspersed with this are flashbacks to Kevin’s childhood, during which we see that Eva was a free-spirited urbanite who reveled in her life in Manhattan and was clearly not looking forward to having a baby with her husband Franklin (John C. Reilly).  Then, Kevin proved to be a difficult child for her–he wouldn’t stop crying as a baby and was developmentally delayed, but because he chose to not use a toilet until he was six instead of being somehow disabled.  He and Eva have a contentious relationship, which grows worse when his younger sister is born, and we see that there’s very possibly something disturbed about him, although there is some ambiguity injected regarding whether or not he’s just naturally a sociopath or if Eva should shoulder the blame for what he’s done.

So it should be obvious why I was interested but wasn’t exactly rushing to watch it or get through it–it’s a disturbing film when I think about how I could be on the receiving end of his massacre.  It’s also a disturbing film because of the way it is so deliberately told and actually eschews all of the gory details in places, allowing us to fill in the details between the images that are shown.  Kevin is a manipulative sociopath, shown through the way he is a loving son with his goofball father (and John C. Reilly was the perfect person to cast in that role) contrasted with the way he shows outright scorn for his mother at a very early age; and in the present, Eva is suffering as much as any of his living victims, having lost so much.

But this movie is flawed in a couple of areas.  While Tilda Swinton’s performance is so good that I found myself sympathetic toward Eva even though she’s definitely an unreliable, flawed protagonist (or from what I’ve read about the book, narrator), those flaws are hard to forgive.  I can understand the way that Franklin can ignore the way his son and wife’s relationship goes, but as someone who vividly remembers the potty training/early childhood years for my own son, I don’t get how there isn’t a scene with a child psychologist when he’s walking around in a diaper at six years old and is clearly intelligent.  I mean, you can No-Prize it, I’m sure, but I sat there wondering “Did you do anything?  Did you bring it up and get shot down?  Is Franklin that much of a doof?”

There are other dots that need connecting from the time of the massacre to the present, some of which are clear but others of which are a little too ambiguous.  We’re led to believe that after that day, she was sued into oblivion by the parents who go after her on the street; I’m curious, then, as to why she stayed in the community.  To be around a son that clearly hates her and whom barely talks to her when she visits him in prison?  I understand that the feelings she might have toward him are complex and while I see some nuance in the way it’s presented (and without expository/explanatory dialogue for the audience), there’s only so many scenes of Eva trying to wash off paint or staring at a half-eaten sandwich that I can deal with.

And then there’s Kevin himself.  Ezra Miller does that dead teenage stare very well and also can convey detached coldness, as can the child actors portraying Kevin at various young ages.  But he could be more fleshed out because after seeing so many of these types of young white boys in the news and having read about their personalities in books like Dave Cullen’s Columbine, he’s basically a “by the numbers” type here.  Yes, I realize that sounds flippant and this was released in 2011, but in the time between the 2003 publication of the novel and the writing and shooting of the film there had been an entire genre–both fiction and non-fiction–created about school shootings.  I wouldn’t have wanted to felt empathy for the monster, but this could have gone further into his depths and made me a little more afraid.  Not of him per se, but perhaps of the possibility of him.  When he’s acting out or rambling in manifesto-speak, I get tired of him really quickly.

It’s a mix of a movie that definitely has me thinking after it’s over, but I am sure there are others out there that explore this much better.