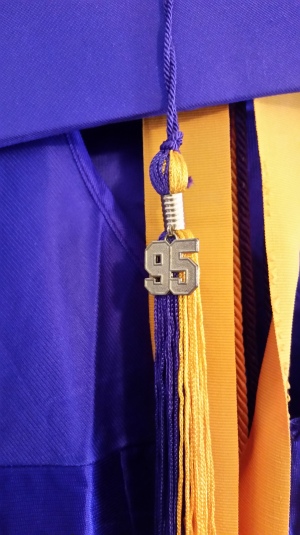 So I would be a complete liar if I said that I had forgotten that I held onto my cap, gown, medals, yearbooks, T-shirts, and other commemorative items from my senior year of high school.  Oh sure, all of the stuff (with the exception of my class T-shirt and yearbooks) wound up in the same box or bin with all of my other high school and college memorabilia and was never put on display in my room or house.  Then, it was hauled from place to place with the same afterthought that came with most things high school, especially when I was neck-deep in college and the real world.

But as I sorted through the stuff and decided what to keep, I couldn’t help but remember the effort that went into acquiring it.

Okay, that’s way more dramatic than it sounds because all I did was order some of the stuff or have it handed to me at an awards ceremony; it’s not like I was Indiana Jones finding a senior award medal in an underground tomb and then using my National Honor Society cord to swing across a pit.  Yes, some of the things I came across were a little harder to get than others–academic awards don’t grow on trees and I had to actually put in the hours for the NHS cord–but for the most part, what i had was the same ephemeral crap that Jostens peddles to seniors every year.  If you teach high school seniors, you know what I’m talking about: a peppy “cool-sounding” adult stands up in the front of the auditorium and plays a video montage about preserving your memories that’s set to a mix of generic uptempo pop rock and sentimental acoustic music all so that seniors will drop $60 on a hooded sweatshirt.

I have talked about this on episodes of the Pop Culture Affidavit podcast–mainly episodes 50 and 110–but the first two years of high school were rough at times and strange at other times and while I will say my junior year was my best year, senior year was kind of weird.  By the end of the first semester, I’d fallen headfirst into drama with a friend I’d dated for all of two weeks, and started a very serious but rather insane relationship with a girl in my creative writing class that would crash horribly in the summer of 1996.  All the while, I was still trying to maintain a high GPA, get into college, and juggle the type of student leadership responsibilities that are incredibly insignificant when you look at them in hindsight but are the entire world when you are 17 (and trust me, that’s a whole other essay).  My problem, though, was years of watching teen shows and movies had warped my mind, so had a picture of what high school was supposed to look like and going into my senior year, I felt like it was my last chance to make that happen.

So here we are, 25 years later with a bin of random stuff that are either all evidence of a last-ditch commemorative effort.  Sure, there’s the official stuff like that cap and gown, awards, and yearbooks, but there’s also the program from the last home football game, which meant something because I went out with the girl I took; or the the scrapbooks I put together for humanities class during the second semester of my senior year (something I’d add to all the way until the end of my senior year of college).    I could look at each of the items I eventually tossed into the trash or recycling and place myself at the moment when I either acquired them or when they actually came to mean something.  In some cases that meaning is very “Jack and Diane”; in others, it’s a reminder how emotionally difficult growing up actually is.

And yet, the emotions that came up while looking through all of this stuff wasn’t traumatic as, say, the emotional baggage I have from the end of college.  Plus, while I had to deal with my fair share of friend and girlfriend drama, I know that when I walked across the stage and got my diploma, I felt satisfied and was ready to move on to the next moment.  Granted, I had no choice because I had to get up the next morning to go to my college orientation, but looking through what would be the last of my hand-written journal entries (I would resume journaling via MS Word that August), it’s more summary and not full of the hand-wringing that I thought it would be.  I describe a moment at prom as perfect and seem to be very okay with living in the moment then rush out to get some sleep.  Knowing how much I thought about and still think about how certain moments in life mean, the way I phrased everything that night seems ironic, but as I sit here and reflect maybe it meant that I was exactly where I was supposed to be.