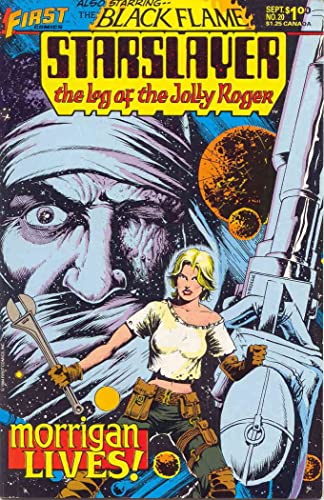 So I mentioned a few reviews ago that it’s clear that John Ostrander was establishing a new status quo for Starslayer.  But unlike the many times I have seen this done in comics and on television, there wasn’t one issue where the supporting cast was jettisoned in favor of a new group of sidekicks and a whole new mission or threat was introduced.  Most of the key supporting players–mainly Tamara and Sam–are still there, and while Chris was introduced as a new teammate, we have come to this new status quo organically.

Issue #19 is the last of the cleanup, as the crew of the Jolly Roger returns to our solar system and have a final face-off against The Raptor, wherein they use a doomsday device called The Starslayer to destroy the sun and the solar system with it before heading off into their own “great unknown”.  This eventually results in the resurrection of an ancient death goddess named Morrigan, and while I have yet to read beyond issue #20, I can imagine that she’ll be the big bad for a while.

The confrontation with the Earth government and The Raptor does feel a little bit like Ostrander realized that he would have to take care of this dangling plot thread before heading off in the direction he really wanted to take the title, but at least we get a final confrontation between Torin and Bragg, who was the big military bad of the original storyline.  And it’s a good one.  They fight on board The Raptor while Chris and Tamara race against time to find Torin and get him back on the Jolly Roger so they can make whatever jump they need to so they won’t be destroyed by the sun’s destruction.  They do so by flying into the black hole left from the sun and reemerging in another universe via a “white hole.”  Okay, I have on idea if that is physically possible, but it’s pretty damn cool and this adventure becomes the stuff of legend in other parts of the cosmos.

And then we start issue #20 with another entity emerging from that black hole–Morrigan.

Most of this issue is fallout from the prior adventure.  Torin is in a coma and has a spiritual journey/face-off with his Celtic ancestors where they tell him that Morrigan lives and he has to destroy her.  Meanwhile, a bounty hunter named Black Thom has stowed aboard the Jolly Roger where he fights against Chris and the new members of the crew, getting through all of them before busting into the sick bay.  He’s about to kill Torin when our hero wakes up screaming that Morrigan Lives, a moment that provides us with our cliffhanger.

It’s a good way to start a newer direction, and I think that Truman is going to be exiting the series soon, especially because at this point he was also working on the Grimjack title.  Hilary Barta finishes his breakdowns in issue #20 and is a good compliment tot hat, as the artwork is still pretty tight.  I also like seeing how the rest of the crew operates together when taking on Black Thom (who originally appeared in issue #10 … another reason to fill that hole).  Morrigan looks a little too “comic book supervillain” for my taste, but I’m hoping that she’ll prove to be a compelling foe.

And yes, I’m going to continue on, rendering my verdict at the end of my run of issues.