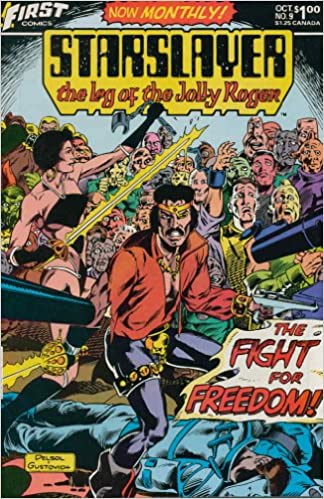 I’m covering only one issue here because I’m missing issue #10 and this marks the only place (aside from issues #1-4) where I have a gap in my run of Starslayer. It also marks the point where Mike Grell turned over the writing chores to John Ostrander, although the art team of Lenin Dustol and Mike Gustovich remain on board.

I didn’t realize that Grell had left the writing chores so early in the series’ run.  I mean, I’m not complaining here because John Ostrander is in the top tier of people you’d want on an action/adventure book such as this one (after all, his Suicide Squad is outstanding), but I guess that I was under the impression that he came in mid-series.  But Grell went off to do John Sable: Freelance at first and eventually would head over to DC to revitalize Green Arrow (and even in 1983, I’m sure he was still writing Warlord).

Not much changes in terms of the book’s premise.  We’re still following the crew of the Jolly Roger as they head out through space in an effort to find a new Earth-like home.  They are still pursued by the Earth council aboard the Raptor, which is their supership, and Tamara is still scantily clad.  Now, that will begin to change a bit as the series evolves, but I’ll get to that later.

So what’s in these three issues?  Well, while he and his compatriots are more or less wanted by everyone in the solar system, Torin is still dealing with the truth about his past (especially not being able to return home).  He doesn’t get a lot of time to properly mourn, which we can see affecting his psyche as we go through the various adventures in these issues and beyond–since he finds himself constantly in battle, we see him lashing out when the violence arrives, having been ripped from whatever contemplation and healing that might have been going on.  It’s a well-paced piece of character development by Ostrander.

That action, by the way, is bounty hunters and other people who are upset with the crew of the Jolly Roger that they destroyed the space station/colony known as Tao VII.  It’s an important detail because it provides us with the impetus for the story but also will give use the means by which we will meet Crayne, who was the station’s owner and whom tags along with the crew for at least a few issues.  But here, the crew encounters a flotilla that is home to about 2,000 interstellar slaves, and they not only fight their way through and eventually off the ship before finally blowing it up, they rescue quite a number of people.  It’s one of those solid one-and-done stories that shows our heroes being the good guys and doing more than having to save their own hides or fight for some rebel cause.  It also has a really solid amount of action within it, as Tamara fights for the slaves’ liberation while Torin stalls the Flotilla’s captain by “negotiating” with him.  Ostrander writes a tight, well-paced book and the art accompanying it is dynamic.

After this is an issue I don’t have, but next up will be a multi-part storyline that furthers Torin’s apparent trauma and also delves a little more into Tamara’s background.  I’m looking forward to reading it.