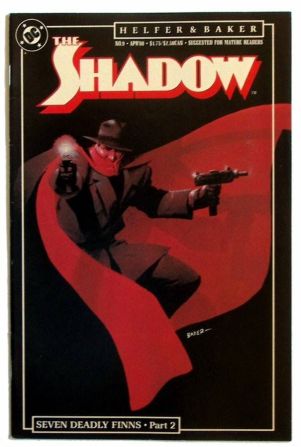 I was curious enough about the Howard Chaykin Shadow miniseries to want to collect the issues I don’t own; I can’t say the same when it comes to this one.

These comics are about halfway through the mature readers series written by Andrew Helfer with art by Kyle Baker (although I don’t think Baker is the artist on every issue) and while I am not sure that the two take the same unconventional approach that Chaykin did, they certainly do keep the violent edge that the 1986 mini had.  But I’m not sure it entirely works.

To be fair, I’m coming in pretty late and in the middle of a storyline, so I have very little context and have no idea whether or not there is connective tissue between these comics and the books that I reviewed a couple of days ago.  But whereas I saw something fresh in what Chaykin was doing, this seems … well, reheated, I guess is the best way to put it.  It’s not bad per se, but I found the story hard to follow and while Baker’s art was good, it’s definitely of a time and borders on trying too hard.

The story seems to be about The Shadow now having a team working for him that runs interference and ops and in this case, they’re going after a crooked casino owner in some way.  There’s a pretty cool running bit about an older couple whose m.o. seems to be faking their deaths as a way to get the upper hand on the baddies as well as the type of characters that we’d all come to know via CW superhero shows (the tech person, the forensics/doctor person, etc. … which when you think of it is basically the A-Team but using a set that’s cheaper to maintain).  Above it all is The Shadow, who seems even more dark and mysterious than Batman.

Maybe the problem here is that I’ve read too many Batman comics?  I mean, I know that on some level, Batman takes a lot of cues from The Shadow–or at least he did in his initial appearances (and that’s not a knock … everyone riffs on everyone else). But at least Batman seems to drive his comic more than the titular hero of this one.  Not that he’s not there, but he kind of just … shows up and then goes away?

Again, maybe there’s something I’m not getting in this, and maybe if I were to find a few more issues, I would be more interested in picking up the rest of the run.  Because it looks like a good book and I didn’t not enjoy it.  I just finished these two issues and decided that I’ll take a pass on the rest.