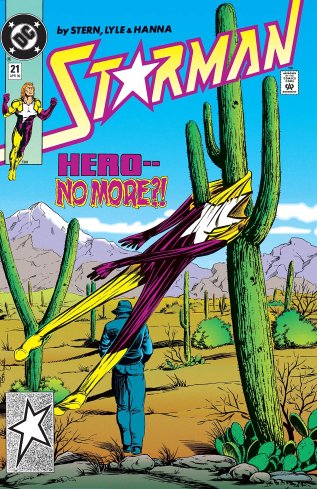 During his first year of stories, Will Payton became a hero, got to the bottom of his origin, and faced off against the Power Company, who were not only created by the scientists who inadvertently gave Starman his powers but were sent to capture and destroy him.  At the end of issue 12, that storyline reached its end, with the Power Company being defeated scientist in charge of the program being exposed and hauled away.  So as this second year of stories begins, he’s on more solid ground and we should expect more solid superhero adventures.

We get that in the first few issues here.  When the Parasite attacks STAR Labs, he helps Rampage (who he learns is his scientist friend Kitty Faulkner) and Superman take the villain down.  This is followed by a side venture to Las Vegas and the first appearance of Deadline, who will be a reoccurring villain and is cut from the Punisher/Deathstroke mold, a super-powered hitman who, in issue #15, is hired by the mob to track down someone who owes a ton of money.  And they are solid, fun stories (then again, Roger Stern writing Superman is always solid fun), but the second year of the title really picks up when they’re over and we get into our hero’s personal struggles.

I guess that Will Payton’s backstory might be more Marvel-ish than DC because he’s not a self-assured professional in the way that members of the classic Justice League tend to be.  Instead, from the beginning he’s an adrift twentysomething guy whose backstory of struggle comes from a place that is very ordinary–his dad left his family when Will and his sister Jayne were kids and their mother had to raise them.  And that abandonment comes right to the forefront in issue #16 where, after saving a kid from being hit by a car, Will’s father is struck instead and winds up in a hospital in San Francisco.

Will finds out from a newspaper story about how a heroic homeless person saved a kid and rushes to see his father in the hospital.  He eventually passes away from his injuries but not before Will reveals who he is, which causes tension with his mother when, after Will tells her about his powers, she throws him out of the house for telling his father first.  It is, in fact, this family tension that drives the plot of the next eight issues, because his father’s death is one of a number of ways that his personal life is rapidly falling apart.  Spending time fighting Dr. Polaris (along with a Power Girl team-up) and a forest fire causes him to miss work and lose his job, and being thrown out of the house by his mother also causes tension with his sister.

So he quits and wanders the desert.

No, that really happens and it’s outstanding. Stern knows how to write pathos well without it dragging the book down, and having already built up Will’s family story, the entire walkabout in these issues feels earned.  I cared about those relationships going in and the curveball that Will’s father threw properly reverberates throughout the book.  I probably wouldn’t have cared about this if I were reading Starman when it first came out in the late 1980s/early 1990s, but that’s because I was a teenager who was often more interested in huge villain fights and how Jim Lee was drawing Psylocke.

I’m continuing to hold off judgment on these comics until I’ve finished reading all of the issues I own.  The series continues to be intriguing and I’m looking forward to reading more.