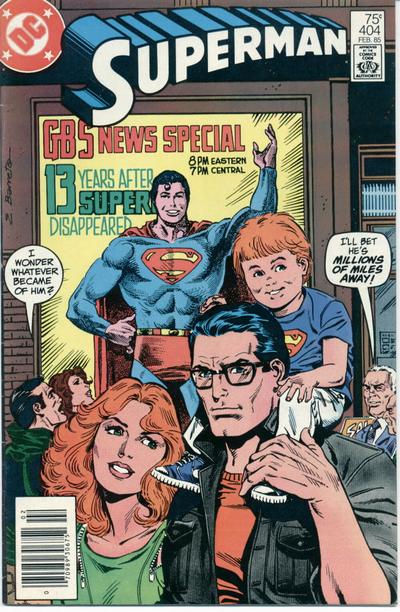 These were two comics that I legitimately had to search the blog to check and see if they were misfiled. I’ve had them for a long time and I could have sworn I had already read and reviewed them. But I guess I mistook them for other late pre-Crisis/early post-Crisis Superman books. Not that they’re forgettable or anything like that, but I guess there comes a point where you’ve read enough of a character that things blur together.

They’re very different in tone and style, which isn’t the most insightful thing to say considering the Byrne reboot has been well-covered since it happened. However, I was struck by how I enjoyed both stories and generally don’t have a preference for one over the other. I have always enjoyed what I’ve read of the early Byrne stuff, but have also always been curious about the late Bronze Age comics of my childhood days of watching Super Friends on weekday mornings.

Superman #404 is an imaginary story that is kind of a proto-“Whatever Happened to the Man of Tomorrow” that takes palce thirteen years after Superboy seemingly disappeared after a battle with Lex Luthor. The truth is that Clark lost is powers in the fight and went into a prolonged coma after which we came out and lived his life as an ordinary person. Of course, “ordinary” means that he’s actually become extraordinary without powers because he’s taken his parents’ old general store and turned it into a supermarket chain. But he is married to Lana Lang and has never met any of the Metropolis regulars.

That story becomes complicated when while Clark is more and more focused on remembering his powers, Lex gets out of jail and runs amok. It then becomes a

Superman/Luthor fight scene where Clark does get his powers back, and honestly, this could have been a two- or three-part story because it has to make the shift from “exploring the imaginary story” to “fight the villain” so abruptly that you kind of lose what you were enjoying about it. Plus, the art is by Carmine Infantino and I’m not a huge fan of his 1980s stuff. Eduardo Barretto did the cover and I wonder what the issue would have been like had he drawn it as well.

Moving on to the Byrne issue, this is a Legends crossover that kicks off a three-parter that stretches across the three Superman titles of the time. With Lois interviewing G. Gordon Godfrey, Clark is pursued through Metropolis by two energy beams that eventually catch up to him and send him to Apokolips. We have his first meeting with Darkseid–who doesn’t know Superman’s secret identity, so Clark is therefore able to “escape” his clutches by being discarded–and a recap of the New Gods’ story (which hadn’t changed since the pre-Crisis Kirby stuff and even included The Hunger Dogs, although I am sure all of that gets retconned in some for by the time Cosmic Odyssey rolls around). Superman then spends the rest of the issue running around the planet trying to simultaneously avoid getting killed and find his way back home.

This one is more dynamic and faster-paced, and feels more “up to date” than the one from a couple of years prior. Plus, the art is gorgeous (and come to think of it, I don’t think the Superman books get subpar artwork until maybe the mid-1990s?), so it really does feel like DC was able to accomplish what it wanted to with Byrne’s Superman. The scripting tends to be a little dense, though, with Byrne giving us quite a number of info dumps and dialogue-heavy pages. But those didn’t bog down the comic, and I can understand why they’re in there–a casual Superman reader might have known Darkseid from the Super Powers cartoon/action figure line but maybe not the New Gods.

I know the Byrne reboot has been collected before and is getting re-collected, and I might start keeping my eye on some of those books when they are offered at a cheaper price.

After all, I do own a number of trades from the post-Byrne FCTC era. It would be cool to see some more Bronze Age Superman collected, especially the Eighties stuff that I see in bits and pieces in bins or in other randomized trades like “Superman in the Eighties.” Of course, I could track them down digitally if I wanted as well, and they would be some of the first things I went for if I ever did get the DC Universe app. For now, they’ll stay in the longbox.