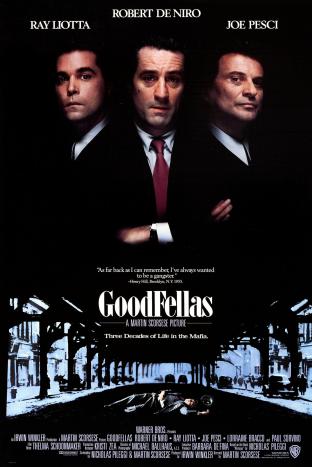 So like a number of movies on my Netflix DVD queue, Goodfellas was added because I’d wanted to watch it at some point a few years ago and couldn’t find it on streaming. Then, I forgot about it and moved on until very recently when Netflix put it back on streaming. So I get to knock another DVD off the queue without paying extra to do it–it’s win-win. And I’ve got to be honest–I’m not sure that prior to this I had ever seen the entire movie. I was really familiar with a number of scenes while watching it and it’s very possible that I had watched all or most of it back in high school or college, but we’re talking 25 years ago, so even if I had seen it all the way through, I wouldn’t have remembered much about it beyond what gets quoted and re-quoted these days.

That’s actually a bit of a … well, I don’t know if it’s a problem or just a weird “thing” that about our popular culture. There are quite a number of movies that I am very familiar with because of them being constantly alluded to, yet I’ve watched them all the way through once or not at all. Scarface is a great example. I know “Say hello to my little friend” and a couple of other famous scenes, but I’ve never actually sat through the entire film. I’ve also only seen the first Godfather movie and even then I’ve only watched it once (I own the trilogy on DVD and it’s on my “to watch” list). I’ve also never seen some of the more famous Scorsese movies of the late 1970s and early 1980s, even though I know of them pretty well.

Which brings me to Goodfellas, a movie that’s considered the best gangster film of all time, right up there with the first two Godfathers. I won’t get too much into the plot here except to say that it’s based on the true story of Henry Hill, a New York mobster who eventually turned state’s evidence and brought down a couple of big names in that particular crime scene. Ray Liotta plays Hill–and narrates the movie along with Lorraine Bracco, who plays his wife, Karen–and we follow him from his adolescence in 1950s Brooklyn through his mob career in the 1960s to early 1980s. It’s a pretty sweeping story and one that is different than The Godfather, as that film is a character study in power and how it can corrupt and consume one man.

There’s certainly aspects of that here, but Scorsese’s also telling a story about the seduction of that power as well as how it can not only consume someone but almost destroy them. It also focuses on someone who isn’t as important in terms of the mob hierarchy as Vito or Michael Corleone.  Henry Hill, while having some importance in the eyes of his superiors, is more of the middle management or low-ranking officer–not a foot-soldier-level grunt but in no position that says he’s in charge (that person, by the way, is Paulie, who is played marvelously by Paul Sorvino).  So this automatically makes Scorsese’s film more gritty and flavored with a feeling of authenticity than what I remember from Coppola’s film (and that’s not a knock against either–they’re both great films).  And it’s meticulously made, but without the staged detachment that you might get from, say, a Stanley Kubrick (again, not a knock–this is actually something I love about Kubrick).  Scorsese’s world feels more organic and lived in and it elevates Goodfellas.

Then again, I might be saying that because the film’s setting and personalities feel very familiar. I didn’t grow up in some Brooklyn mafia family, but I know enough from my youth on Long Island and trips to see my Italian relatives to recognize a lot of what’s here.  But that’s also why I didn’t expect to like this film, because it embodies and is responsible for so many Italian-American/New York stereotypes, many of which are carried on by numbnuts who think they’re cool enough for Goodfellas but are more likely headed for Jersey Shore.

Of course, that’s my own hangup and when I look at this film for what it is, it’s really brilliant. It is meticulously made and well-told in an organic way. Even if you’re not a fan of these types of films, it’s must viewing.

Btw, I’m changing my rating system for this slightly to make it “watch” or “skip.”