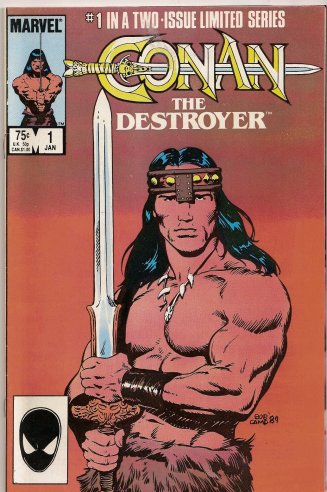 Yesterday, I looked at Blade Runner.  Today, it’s issue #1 of Conan: The Destroyer, a Marvel miniseries that was also taken from a treasury-sized Super Special.  Now, I didn’t take the time to watch the movie along with it because it wasn’t on my list or in my queue, and I don’t recall being particularly fond of it when I was younger.  It seemed like a cheesy, even cheap in places sequel to a movie that I absolutely loved, and based on what I’ve read about its production, my assessment is not far off.  Apparently, Universal intervened with the producer and director and insisted that this be more family friendly than Conan: The Barbarian, which is an R-rated testosterone fest of epic proportions (and honestly, what would you expect from John Milius).  The PG rating definitely shows.

The story, as it is, has Conan leading a group on a quest to find a special key (or some other maguffin) and they are aided by a group of thieves and adventurers.  I know that one of them is played by Wilt Chamberlain in the film and at one point Grace Jones is involved.  And it’s this whole “help the kid” type of plot that drags the story down because now we’re at a point where the hero sort of feels like he could wind up being a sidekick in his own adventure.

I will say, though, that Michael Fleisher does what he can with the script (which, as I read in the movie’s IMDb trivia page, was based on a story by Roy Thomas and Gerry Conway that they eventually turned into an OGN because they hated the way the final film butchered their idea) and John Buscema, who is no stranger to Conan is on art so it’s a very good looking comic.  Whereas I felt that Blade Runner was stiff in places, this one is a lot more fluid and there’s some solid action.  Plus, Bob Camp’s cover–which is a reproduction of the movie poster–is absolutely gorgeous.

It’s not a book that I would seek out or look to finish, to be honest.  I guess if I was more into Conan and the Conan comics, I’d do the completist thing and finish the series, but while I did enjoy the book more than I did the Blade Runner adaptation, it doesn’t make me think it’s any better than the mediocre film.