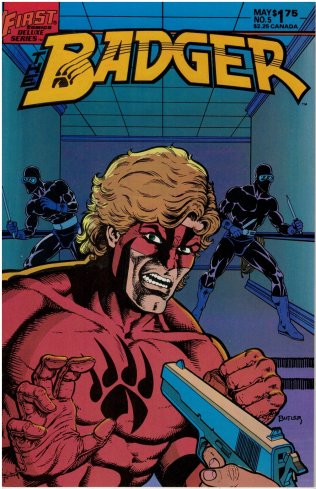 I looked at an issue of The Badger last year during the “Fighting the Independents” blog post series and said that I’d consider looking at or reading other issues of the book if I came across them on the cheap.  Lo and behold last year when my LCS was bought and moved locations to a bigger store.  On the grand opening weekend, they had a huge quarter bin sale, putting out a ton of back issue inventory that they wanted to unload.  In those bins were a huge lot of the series (along with Starslayer, which I’ll get to next), so I thought, “Why not?”

I added the missing issues of The Badger to my pull list because I thought that maybe I’d get the full run and then start reading, but I think I have exhausted everything my LCS has to offer, so when I was looking for something else to read the other day (my Suicide Squad read-through is on hold until I find the rest of The Janus Directive), I began pulling the Badger books.

The writer is Mike Baron, whose Punisher I was familiar with from back in 1987 when the ongoing series premiered.  There’s a similar voice and perhaps even premise here, so I think that Baron ported some of his creation over to Frank Castle in the late 1980s.

Anyway, issue #5 is the first issue published by First Comics, after the defunct Capital Comics had run issues #1-4.  This, by the way, seems to be the case for a number of books from the Eighties indie scene–they’d hop from publisher to publisher, partially because the first publisher went under.  To First’s credit, there is both a prologue and a text piece by Mike Baron that outlines who our character is and what drives him.

Okay, that’s very flip and insensitive.  Truly, though, Baron outlines the fact that Norbert Sykes, decorated Vietnam veteran, has had a psychotic break and now dresses up as The Badger, meting out brutal punishment to anyone committing even the most minor of crimes.  In his text piece, Baron says that what he’s doing with this character is not only delving into the psychosis of the vigilante, but taking a humorous approach in doing so.

The first issue sets us up with that parody of sorts, as Baron hits all of the beats that an Eighties action hero needs to hit.  He’s a martial arts guy, he’s got an associate named Ham who is also telepathic and seems to have mystical powers, and they’re working with Ham and Norbert’s former psychologist, Daisy.

So the band is together, so to speak, and they get their rich mansion HQ pretty easily because Ham can use his telepathic powers to win cash (something I’m sure we’d all think of doing even if with great power comes great responsibility).  Then we get a villain in an evil corporation that is going to destroy the environment by building a nuclear power plant.  There’s also these yak-looking people who are Ham’s arch-nemesis but with whom he has to team up to stop a tidal wave from destroying Los Angeles in issue #6.  In issue #8, the Badger has wound up back in the psych ward because it seems Norbert and The Badger are more like two separate personalities.  Then, he gets let out and has to fight a huge demon.

The others seem to go much like that–Baron seems to pull whatever crazy type of threat or villain he can for the hero to fight, and then in issue #14 he does one of those typical “spirit quests with a sensei” stories.  So I can see the satire, though I don’t always see the humor, just the sheer amount of violence that he was able to get away with in a non-code book in the Eighties.

It’s hard to judge these because Eighties indie comics have never really been my jam.  Plus, when I go back into old comics like this, it takes me a little while to acclimate myself to the storytelling style, doubly so if I am not familiar with the character.  I know that Baron has an ongoing narrative about this guy who is a vet with mental health issues, but many of the books at this point seem to be a one-and-done (or maybe two and done) “villain of the week” story.  They’re also certainly of the “popcorn reading” variety.  I’m not getting a ton out of them aside from being entertained.  Consequently, I’m not sure that I’m going to come back to them after I am done.

I’m going to save my verdict, however, until I finish reading all of the issues that I own.  This way, I can decide if I am going to add the series to my more permanent collection as well as fill in the gaps.