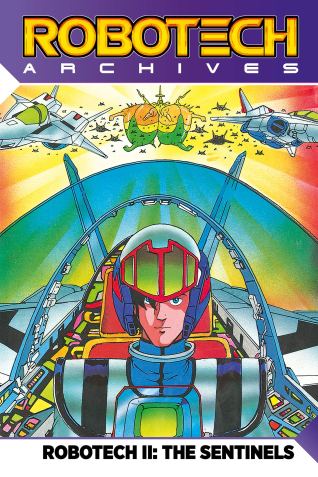 I was excited and nervous about reading this, to be honest. I’d read through all three of the reprints of the Comico Macross series and knew what to expect, but this book reprints the first portion of the Eternity Comics sequel series, of which I’ve heard mixed things.

My experience with The Sentinels as a Robotech story has been greater than some people, probably. Years ago, I read the Jack McKinney novels as well as rented the movie from Blockbuster, and that was pretty much everything. The comics were something I’d seen solicited in Previews back when I was in high school, but even though I was interested, I never ordered the books. Of course, years went by and even when I thought about tracking down the comics, they were pretty hard to find. Then, Titan Comics solicited the archives collections

The Sentinels was, in case you are not familiar with it, a proposed anime series that followed the further adventures of Rick Hunter, Lisa Hayes, and the crew of the SDF-3 as they head to the Robotech Masters’ home planet on a diplomatic mission. Three episodes were produced and were released as a movie (which I mentioned renting from Blockbuster at one point), but the show was abandoned. The novels took what was available and expanded upon it, with the writers finishing everything with The End of the Circle, which is book 18 in the original paperback series.

Concurrent with those novels are the comics, which ran for 70 issues (according to a note in the Archives book), and this collection comprises the first 16 issues of the Eternity series along with the two specials that feature the wedding of Rick Hunter and Lisa Hayes. The art is completely in black and white, printed on paper similar to that of Marvel’s Essentials (I believe the original comics were similar in format), and Titan Comics has printed a color gallery of the series’ covers.

So the SDF-3 spends the first few issues getting ready for the big wedding as well as the mission; concurrently, the Robotech Masters have abandoned their home planet of Tirol because they are on their way to Earth (as detailed in the second Robotech cartoon/comics series). While they’re gone, the Invid (the enemy from the third series) overrun Tirol and two of the only survivors are Cabell, a Tirolian scientist; and Ren, a Zor clone who is his protege. While they hide from the Invid and do what they can to survive, the SDF-3 heads for Tirol and straight into a confrontation with the Invid. Oh, and Minmei and her friend Janice (who is actually a cyborg) are stowaways on the ship.

The first confrontations with the Invid are brutal and it soon becomes clear that the Robotech Expeditionary Force (REF) has a fight for their on survival on their hands, especially when the ship is badly damaged and it looks like they’ll be stranded there for what might be several years. Also providing tension is the power play being made by Colonel T.R. Edwards, who’s always had a tense relationship with Rick and our heroes. Meanwhile, we get an ongoing struggle between the king and queen of the Invid–the Regent and the Regis–over power, military maneuvers, and the ongoing quest for more protoculture. In other words, they are taking themes from the prior series and building on them, as well as filling in some gaps from all three series.

I read this–a 464-page collection–in a day. Of course, the characters being very familiar to me helped quite a bit, but I was rivited by the action and the story. The artwork was better than I had assumed it would be, and the black and white was not a problem (then again, I’ve read quite a bit of Marvel essentials and DC showcases). At one point, Titan said they were going to reprint this entire series, but nothing has been solicited in the last several months. I really hope they do solicit and print the remaining Sentinels volumes as well as the Masters and New Generations Comico series because I’m really enjoying what I’ve read. It’s all well worth the money.