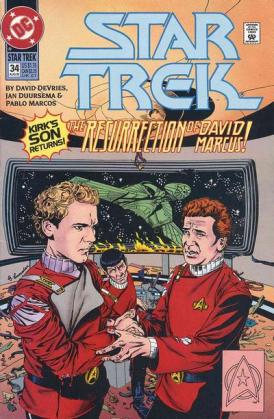 I’ve been building a collection of Star Trek comics over the last couple of years, but have mainly been focusing on collecting DC’s first series, which I will probably start reading once I feel that I’ve collected enough of the series (or at least after I’ve finished runs of other books).  These two comics, however, are from the second Trek series DC published, which I guess we can call “the baxter series”, although by the time it started, wasn’t a phrase people were using as much anymore unless they were talking about New Teen Titans, Legion of Super-Heroes, or The Outsiders.

Anyway, I had grabbed these at random from a cheap bin a while back, having fond memories of the few issues I bought off the stands back when I was in the eighth grade.  I’m still completely unsure of why exactly the change was made from DC’s standard format to its updated “new” format, and I know that when they did this particular series they jettisoned a number of the expanded universe elements they created in the original series.  But I tried not to think about that and instead treated this as if I had just come across an episode of the television series on cable.

That seemed to work, even if one of these issues was part of a multi-issue story.  That would be issue #27, wherin Kirk and the wife of an old friend of his pretend to be married so they can do some covert work on a planet that is hostile to the Federation.  Meanwhile, the crew investigates the aftermath of a massacre of those same people on an outpost, a massacre perpetrated by the Romulans.  Issue #34 is a stand-alone story whose cover enticed me because it was the “return of David Marcus”, which is misleading because the plot centers around Kirk, Spock, and McCoy landing on a planet that allows you to live out dreams or fantasies–think the black mercy plant from “For the Man Who Has Everything”.

Issue #34 is a letdown because Kirk’s dream about having David by his side on the Enterprise is much shorter than it needs to be.  Issue #27 is pretty solid–there’s some good interaction between members of the crew when Kirk isn’t around and a pretty good twist when it comes to Kirk’s mission.  The artwork in #34 is by Jan Duursema, who I’ve seen in Star Wars EU comics as well as ’90s X-Factor and older DC stuff like Arion; #27 has very early career artwork by Brandon Peterson.

So, it’s a split decision here.  I’m going to keep collecting the original Trek series from DC because what I’ve read has been intriguing and everyone I’ve talked to about it has has good things to say.  I want to see how the story in issue #27 (which ends on a cliffhanger) finishes up, so I’m going to hang on to this one and then see if I can find the rest of the storyline.  But #34 isn’t going to stick around, and that suggests to me that this particular Star Trek series is the very definition of hit or miss.