So in the last post, about the Mount Vernon Trail, I shared a scan of the official guide map that was published by the National Parks Service, which I had kept since I walked the trail in 2002. It wasn’t the only one of those guidebooks that was in my filing cabinet–or better yet, piled on top of my filing cabinet–and when I began cleaning up the home office (something I admit has significantly stalled since this time last year), I found that there were maps and guidebooks I had been saving, perhaps as a way to commemorate my experience.

I’ve always had a love of maps.  This goes all the way back to when I was probably about five or six years old and I would all sorts of “routes” all over my grandmother’s outdated Rand McNally Road Atlas.  So it’s no surprise that among the things that I’m sorting through, scanning, and throwing away, are maps and guidebooks.  I actually once owned a Rand McNally Road Atlas at one point as well as local/regional ADC-published road atlases for both Northern Virginia and the Charlottesville area, but those went the way of the recycling bin years ago when development and other changes in those areas made them beyond obselete.

But those were easy to get rid of years ago because now I can scroll around on Google Maps or Google Earth to see how to get to places I want to travel and also have indulged my love of maps and roads via websites and Facebook groups that are dedicated to pictures of highways and even road signs. These are the guidebooks and guide maps from tourist destinations, parks, and museums, ones that I had grabbed upon entry and used but couldn’t bear to throw away even if they would only be stored in a file folder for years.

I can’t imagine why the maps for art museums seemed important enough to be saved; it’s not like I was going to bring the map with me when I went back to the VMFA, MoMa or the Art Institute of Chicago. I think that by the time I had grabbed these and saved them, I was so used to going to places and saving the maps that I shoved them in the folder next to other monuments, memorials, and historic sites whose maps I didn’t think were as important or were in poor condition (those EPCOT maps get pretty destroyed when you’re carrying them around all day).

But the National Parks maps are the ones that I actually felt that I was collecting at one point, especially when I lived in Arlington. As I mentioned in the Mount Vernon Trail post, I used to Metro into D.C. and then walk back, and very often I would find a route that took me around the monuments and memorials, which I would stop at if I had the time. 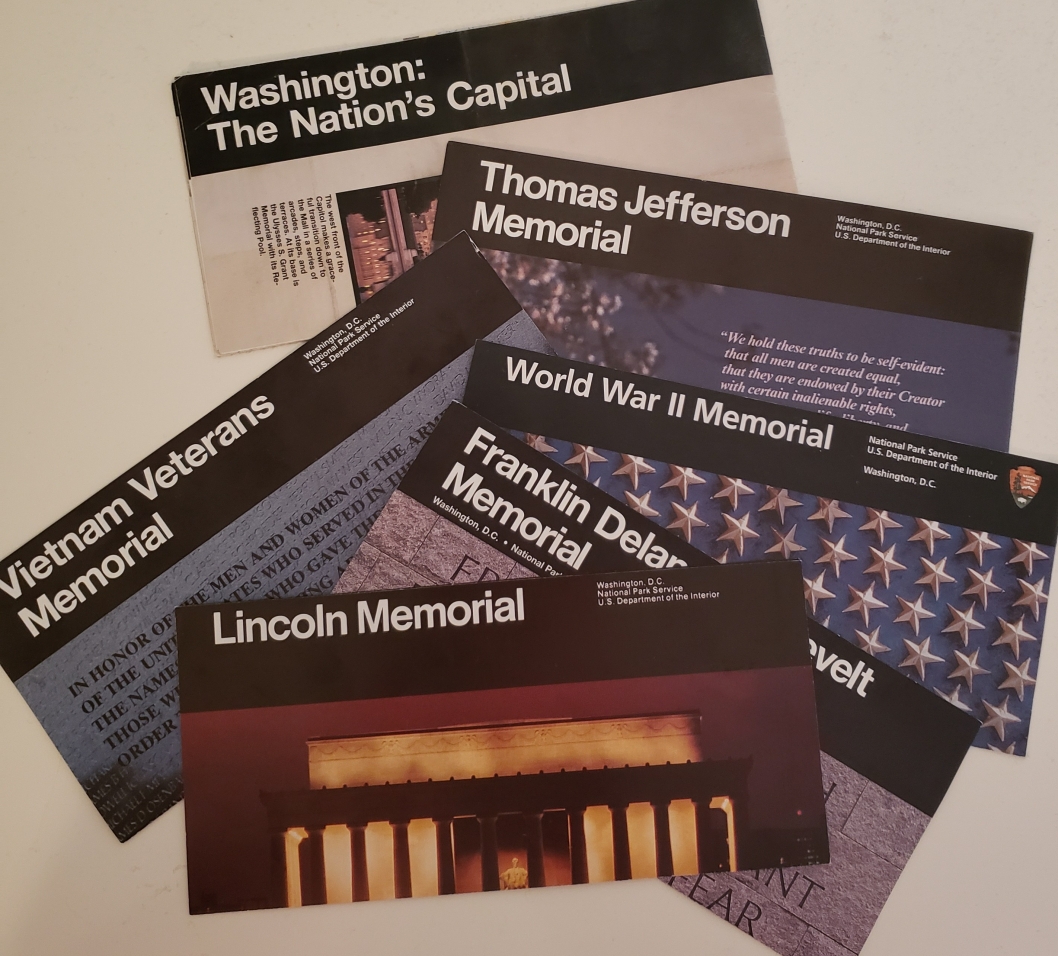 As you can see, there is a standard design to the guide maps and until they switched to Calibri in the 2000s, the NPS used a classic sans serif typeface (I am pretty sure that’s Helvetica, though it may be Arial) in white on a black background.  I absolutely loved the design of these when I was younger because they felt so official; heck, I still love them.  Needless to say, these provided information about the memorials in the age before Wikipedia and still do (as far as I know, they are still available).  The information is pretty useful, as listeners to “In Country” will find the Vietnam Veterans Memorial guide to be familiar.

Washington: The Nation’s Capital, though, was my favorite of all of these.  While I don’t know if I marked any visitations like I marked trails on the Mount Vernon Trail map, I do know that I would plan out my walks around D.C. via this guide map because it was probably the biggest and most comprehensive of all of them.  The map folds out to cover the area around the National Mall, fanning out to what’s right on the Tidal Basin, and including the smaller, lesser-known monuments and memorials that dot the landscape. Those were some of my personal favorites in D.C. when I would take these walks, because while there were always crowds in and around the Lincoln or Jefferson Memorials, the World War I monument to those from D.C. who served in the conflict was barely known and therefore wound up being something you came upon.  The same was true for the monument to George Mason, which was located right below the 14th Street Bridge.  And it sounds odd to say this, but I enjoyed the off-the-beaten-path nature of some of those places that this map helped me find, even if they were “hidden in plain sight.” 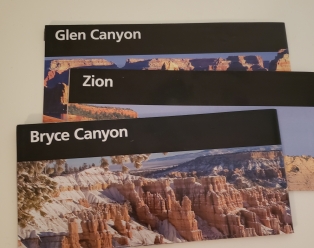 Those weren’t the only maps saved or that accumulated, obviously.  I actually have several national parks maps that served a practical purpose that I’m not getting to because I intend to cover them the same way I looked at the Mount Vernon Trail, especially since I have pictures of scenery, even if there aren’t particularly interesting stories about it.  But there were also a few that my parents had picked up and passed along from their trip out west a couple of years ago.  I think that we were considering a similar trip, although the logistics got in the way and we never did, but I held onto the various “canyon” maps because I was amazed at how much about these enormous parks could be shoved onto one foldable map.

But–and I realize this whole post seems like forced writing, because it is because I haven’t done any draft so there you go–looking at those maps before I eventually put them in the recycling bin reminded me of sitting on the floor of my grandmother’s house, tracing lines across an outdated road atlas.  I don’t know if it’s inherent wanderlust or I just really like maps, but it’s an unexpected found joy, and I’ll take it.