So there I was, having finally found my favorite comics booth at the Baltimore Comic-Con, with my handwritten list of needed back issues.  After ten months of reading books and deciding if I should hold onto them, the moment had finally arrived where I would be put to the test.  Could I shop for back issues and still uphold my mandate?  As I mentioned in my previous post, I set out to only fill holes in my collection.  This meant that if it wasn’t on the list, I wasn’t buying it.

This is easier said than done.  Like I have said often, and like I said to the guy standing in line behind me on our way in, you can plan all you want but then the excitement or anxiety will get a hold of you come showtime and you find yourself dropping money on things you didn’t realize you were willing to buy.

Not that I had regrettable purchases or anything like that.  As I surveyed what I bought, I felt pretty good about it (with one exception that I’ll mention below).  But enough preamble, let’s get to how I did.  I’ll start with the …

New Stuff.  This is stuff bought directly from creators or merchandise from booths.  The latter was just three items, two pint glasses (Batman and Nightwing), and a Mr. Met Funko Pop figure that I didn’t pay very much for and is currently in my classroom (out of the box, btw, which would drive some Pop collectors mad, but let’s be honest, they’re the Beanie Babies of this decade).  The stuff bought from creators included graphic novels from Thom Zahler (Warning Label, two issues of Love and Capes: The Family Way) and Steve Conley (The Middle Age), and the first trade of Rai from the Valiant booth.  You’ll hear me talk about both of those in the upcoming episode of Pop Culture Affidavit that features my convention coverage.  I also bought some great-looking prints from Todd Klein and Luke Daab, which you can see below.

I call this one a success, especially since they’re all really great looking prints that will look great in a frame.  My only regret is that I didn’t explore more stuff offered by creators, because I would have walked away with more unique pieces.

Turning my attention to what we all go to shopping for at these conventions, there are the trades and back issues … 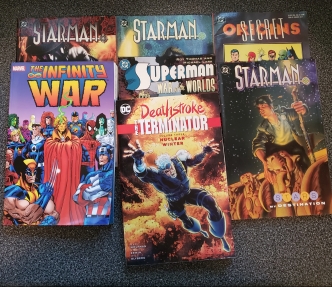 Trades. Out of all of the stuff, this contains my one regrettable purchase.  I stumbled upon a $5 trades/5 for $20 sale and grabbed a lot of stuff that I didn’t need or hadn’t thought of getting.  One trade–the third volume of the 1990s Deathstroke: The Terminator trades–was in there and that’s been on my Amazon wish list for a while, so that’s a check in the “plus” column.  But the others were very much me picking out things that looked interesting or I’d always wanted to read.  In other words, adding to the piles.  This included the trade of Marvel’s 1990s crossover Infinity War, the late 1980s Secret Origins trade paperback, and a few of the collection of James Robinson’s Starman, all of which I needed … except one.  You see, I had forgotten to add these to my official trade paperback want list, so when I got home and saw that I had bought a book I already owned, I was pretty annoyed at myself.  Granted, it’s only $5.00 and I could sell the book on eBay (which I will do), so it won’t be a total loss, but when you live with the voice of everyone who ever pointed out something you did wrong or a mistake you made in your head at all times, you tend to dwell on screw-ups like that.

I want to give myself a D for this because between the conspicuous accumulation and the duplicating a book I already owned, it definitely wasn’t “uncollecting”, but I’m going to be generous and go higher because the books I bought were stories I am interested in reading and they will more than likely get read in the next couple of weeks.

Back Issues.  I saved the big test for last.  Could I avoid picking up random back issues and just stick to my list?  With one small exception (the What If? issue “What If Phoenix Had Not Died?”), I did.  While I didn’t complete my runs of Camelot 3000, Arak, or The Black Dragon, I got much-needed holes filled and was able to go through the bins a lot more quickly.

You know, it’s tough not to feel overwhelmed by everything when you go to a show like this, and it’s tough not to get caught up in the desire to own all of the things.  One of my favorite parts of attending the Baltimore Comic-Con these past eight years has been the joy of finding stuff that you either didn’t know existed at all or that one thing you didn’t know you needed until now.  And while I can definitely say that you can attend a convention without having to drop too much money if you go to panels and just get some books signed, but the point of this challenge was to go right at it and see what happened.  The results were mixed, but I had a great time at the convention and I’m looking forward to next year.

You can check out the rest of my convention coverage over at Pop Culture Affidavit, where I have a blog post up and will be sharing my audio on episode 102 of the podcast.