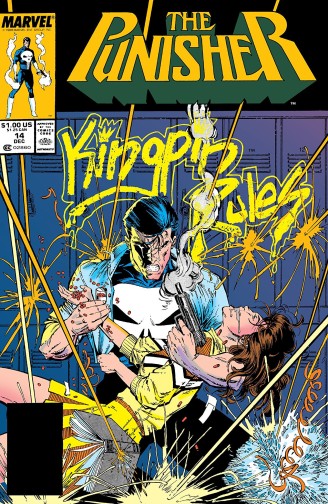 I came home one day to a package with these four comics in my mailbox, all of which were from the Punisher ongoing that ran from the late 1980s into the early 1990s.  I bought the first four issues when they came out (covered on episodes of “Origin Story” a few years back) and then stopped collecting altogether for a few years before picking up a few issues at random (I want to say #45, 47, and one in the 50s or 60s).  By that time, the character was pretty much a predictable, routine story that was often something out of an action movie or a syndicated television series from that era, so the stories were never a priority.

I know Alan sent me the first of these comics because it involved Frank going undercover as a high school teacher at a really tough school that’s controlled by gangs taking orders from The Kingpin.  It’s a multi-part story that runs from issue #14 to issue #18, so I don’t have all of it here (and #14 and #15 both take place in the school with #16 moving us to the Everglades).  But Mike Baron, who wrote the majority of the series and knew how to turn up the volume when it came to action, is skillfully and stylishly backed up by Whilce Portacio, whose art is very much of its time but I will confess that I liked back when he was on Uncanny X-Men and like here.

The other issues are Frank trying to investigate a possible boxing match fix and then heading to some sort of ninja camp, like this is the Cannon Films classic American Ninja.  Erik Larsen is the artist on those and while I wouldn’t have been a fan of his art back when I was a kid, I can say that I’ve warmed to it over the years.  This one is a little crazier than the high school/Kingpin story, but I enjoyed what I read.

I’m splitting my decision on these books because I’m headed to the Baltimore Comic-Con next weekend and if I find #15, 17, and 18 (the rest of the Kingpin story) on the cheap, I might pick them up so I can read the whole storyline.  While I was definitely entertained by the others, though, I think I’m going to pass on the rest of that story.