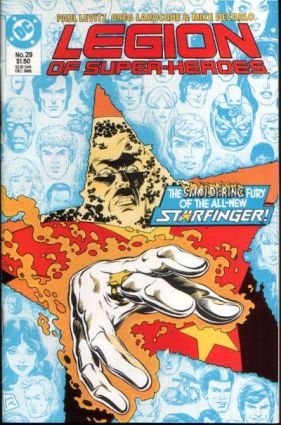 So back when my LCS had its last “Shortboxtober” event, I took a deep dive into the bins and decided to grab a handful of Legion of Super-Heroes comics.  I’ve only actively read the Legion’s adventures once, starting in 1994 right before Zero Hour and going until about 1996 or so, probably quitting shortly after Final Night.  But at one point or another, I owned several back issues of the series and have “The Great Darkness Saga” in trade paperback (signed by Paul Levitz and Keith Giffen), so I am familiar with DC’s 30th Century heroes.

After Shortboxtober, I originally decided that I wasn’t going to read anything until I collected a massive run, or maybe the entire series.  But then this whole “Uncollecting” thing began and I found myself staring at them in my longbox, just several issues of two separate series.  I knew that it wasn’t going to be a complete look at the team, but I figure that I should learn enough to be able to make a call on which era, if any to collect.  Now, members of the Legion of Super-Bloggers will tell you that I should throw caution to the wind and collect ALL the Legion comics, but let’s be honest: they’re enablers.

Reading the Baxter series books felt like coming into a long-running television series in season 7 or 8, or if I started watching General Hospital right this very moment.  Yes, I was able to understand what was going on and who the characters were, but the entire time I was reading, I felt that I was missing something.  Furthermore, while it was clear that Paul Levitz was starting to run out of gas here.  There were issues where the action seemed secondary to subplots and drama, and that worked against the Legion the same way it worked against the Titans in this era–the only difference is that I have more of an investment in the Titans–and while I enjoy Greg LaRoque’s Flash artwork, his Legion stuff leaves something to be desired.

That’s not to say that it was issue after issue of people talking to one another about relationships and leadership elections or anything like that, and I have read other issues from the era that really give us a space epic (I owned issue #50 of the series at one point and really enjoyed it).  But these felt like, in both a good way and bad, the Star Wars prequels.

The Five Years Later Stuff on the other hand, was more intriguing.  I think it’s because everything in the galaxy has gone to pot and the Earth is especially damaged (I once owned #38, wherein the Earth blew up), and while I had read a number of issues of the series in the past, there’s a through narrative that I never got all of.  Yes, there are points where the writing is a little too opaque and I could have done with an artist who used at least a couple of splash pages here and there instead of Keith Giffen’s rather claustrophobic grid structure to nearly every page, but the grimness of this future is a true draw, as is the Dominators as the big bad (in the back issues of the Baxter series that I read, the big bad seemed to be Starfinger and my response usually was “This guy again?”).

I kind of regret selling the 5YL books that I once owned because now I want them back and want to see what that comprises that entire era.  I don’t know if I’ll keep them after reading them (and the condition of some of the books I have isn’t exactly “sellable”), but this seems to be a road worth traveling.