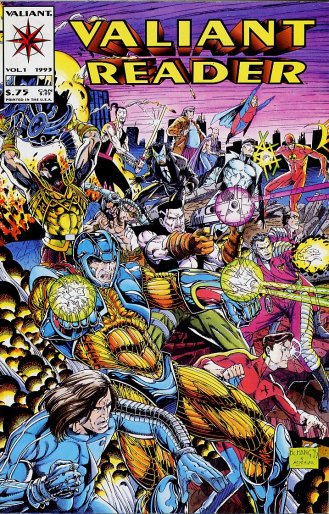 The end of the big longbox of independent comics that I obtained for free a few years ago features a pile of books from one of the bigger indie publishers of the early 1990s, Valiant.  Now, I’ve already looked at Image and did it all in one post because while I did get out of the Image game earlier than some other people did, over the years I have borrowed and read a ton of Image books, especially WildStorm titles.  So I didn’t feel the need to really get into the specifics of what Image was publishing.

Valiant, on the other hand, was a company that I rarely engaged.  I had a couple of issues of X-O Manowar and did buy and own all of Deathmate, but the company never appealed to me.  I honestly have to say that the reason is very superficial because it has to do with the way the books appeared.  The artwork never seemed to measure up to what I was seeing from Image or Marvel (and in some cases, DC) and the way the books were colored, they looked very washed out and not as vibrant as what I was reading from other publishers.  I know, like I said … superficial.  So, with all of these classic Valiant books in my reading pile, I figured that this would be a good time to give the company an extended look.

Thankfully, whomever owned these comics prior to me had a copy of a 1993 book called Valiant Reader.  This was literally a “cheat sheet” for anyone who had never picked up a Valiant book and was interested in finding out what they were publishing.  Retailing for a cheap (both then and now) 75 cents, there are two page spreads introducing each of the main Valiant books: Archer & Armstrong, Bloodshot, Eternam Warrior, Harbinger, H.A.R.D. Corps, Magnus Robot Fighter, Rai/Rai and the Future Force, Secret Weapons, Shadowman, Solar Man of the Atom, Turok Dinosaur Hunter, X-O Manowar; and profiles of the characters Harada, Master Darque, Doctor Eclipse, Doctor Mirage, Ninjak, and Timewalker.  Each of the title spreads combines a Who’s Who-esque shot of the main character or characters of the book along with a quick description of who they are and is accompanied by a timeline that shows the cover of their first appearance as well as panels highlighting significant events that have happened so far.  The big universe-establishing crossover Unity is mentioned multiple times (and I believe that when this came out, that series as well as any pre-Unity Valiant books were going for a decent amount of money on the back issue market) and in some cases, the chronology starts with a character’s appearance in a comic from Gold Key or another company.

Having this dictated how I was going to read these books.  I decided that I was going to read the description and timeline first and then would move on to the books from that specific title before going on to the next.  Whether or not I’m keeping any or all of them remains to be seen, but I know that Comixology has a number of classic Valiant titles if I ever want to read an entire series, so this reference guide is a huge help.