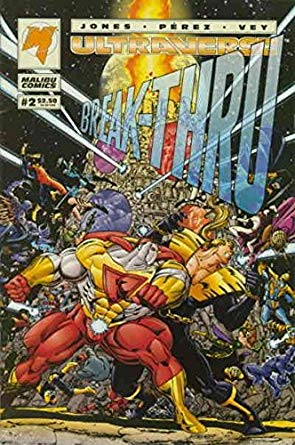 In the big box of independent comics that I’m making my way through (and nearing the end of), there are several comics from Malibu’s Ultraverse line.  I’m sure that anyone who was collecting comics back in the early 1990s is familiar with them and may have even dabbled in them.  If you’re not, just know that it was Malibu’s attempt at creating a cohesive superhero universe along the lines of what Image was doing at the time, but the big names attached to these projects were writers and not necessarily artists (with a few exceptions, of course–I’m trying to keep this explanation simple).  It lasted for a couple of years, and then Marvel bought Malibu, which eventually killed the whole thing.

So I’ve got the following …

I once owned The Strangers #1 as well as Prime #1 (which is not in this pile).  The Strangers wasn’t one that I enjoyed back then and I wasn’t that into it now.  Prime was the one title that I was interested in collecting but somehow I missed issue #2 and never went back to get any other issues (plus, looking at was out back then, the X-Men titles, Superman, and Batman were sucking up most of my comics money).  Break-Thru was interesting at the time but I have to say that I probably would have found it more interesting if I had been more invested in the Ultraverse at the time.

Plus, Break-Thru and Freex are penned by a writer whose name I can’t bring myself to say considering his actions and subsequent punishment.  I flipped through them and automatically decided they were trash. And that does bring up the issue of whether or not you hold on to works by artists who were otherwise horrific people and where you draw the line/make the decision.  I have the Emerald Dawn trade and haven’t thrown that out, but this was easier to get rid of because I didn’t have the same investment to it going in (see also: why I still have a copy of Thriller).  I know that keeping one thing by him or by another writer/artist and throwing this out makes me a hypocrite, but I think I’m allowed to admit that it’s a lot of moral and mental gymnastics to do when you consider how many awful people created well-known and well-loved works of art.

But Firearm was written by James Robinson, a writer who I have been hot and cold on over the years, and it is a really solid series.  There are only 18 issues in the original series (plus a Codename: Firearm series from Marvel’s mid-Nineties re-launch).  I kind of like this odd, hard-boiled P.I./merc in the ’90s superhero world take and am going to hold onto the issues I have to see if I can get more and read them when I do.