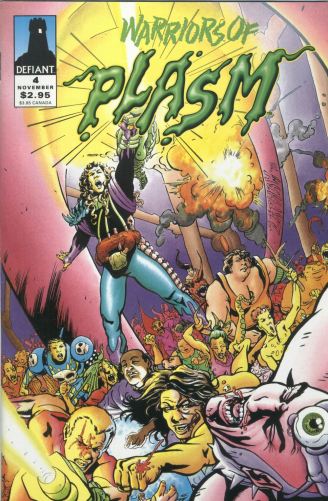 I’m throwing all of these away, so the answer to the running question, Keep, Sell, Donate, or Trash?, is trash.  That’s not to say that all of these are bad reads–in fact, some of them are fairly interesting–but none of them were worth holding on to the individual comics.  I will say, though, that I jokingly considered calling this section “What am I throwing out this week?”

It’s never really been my intention to throw away all of these independent comics, even if most of them were ones that I happened upon for free.  In fact, my order for reading them has been straightforward–I am starting with the front of a longbox and working my way to the back.  Now, I know there are some in that box that I’ve read already and will be holding onto, and there have been some nice gems in that box (I found myself enjoying The Way of the Rat more than I thought I would).  But even so, there’s a lot of filler.  In some cases, it’s just some really terrible comics.  In other cases, it’s a Free Comic Book Day issue that was enjoyable for what it was but wasn’t worth going beyond.  And in some cases, I could see why people enjoyed the book, but because it was from the Nineties, I’d seen it done so many times that it didn’t seem to set itself apart in any great way.

So here are the individual comics.

Buck Rogers: 25th Century A.D. FCBD 2014 Special (Hermes Press):  Not a bad effort, as it’s got some pretty informative text pieces about the popularity of Buck Rogers during his heyday as well as the contribution that artists such as Murphy Anderson made to the character.  It also includes a preview of what was then an upcoming Howard Chaykin take on the character that shows some promise (only because Chaykin’s art is very strong).  But the way the old strips are reprinted makes the art and text pretty small, which is a shame for the art because most of it is very nice.  The story is what I was expecting from a comic of this era (I’ve read some Golden Age sci-fi before), although even though I know “it was a different time,” I was still turned off by the way the Asian-raced villains were drawn.

Martha Washington Goes to War #3 (of 5) (Dark Horse):  From the mid-1990s, one issue of a miniseries, and a middle chapter at that.  I suppose I can’t be too hard on this, but I do have to go by the maxim of “if it’s interesting enough, will I buy the rest?”  I’ve done that with story arcs and miniseries in the past.  This is Frank Miller and Dave Gibbons’ take on what looks to be a post-apocalyptic America, kind of a Mad Max in the U.S.  The main character is interesting and the action is well-paced (Gibbons’ art is great), but it’s a trope I’ve seen repeated time and again and they’re not making me want to track down the rest of this.

Hellboy 20th Anniversary Sampler (Dark Horse):  I’m not sure how this wound up in my lap, if it was part of the box of comics or if I got it for free at my LCS.  There’s a couple of fun stories in here and I have to admit that I might see if my library has any Hellboy trades or if the movies are on streaming.  But it’s not like holding onto this is going to be crucial.

Out of the Vortex #3 (Dark Horse):  This is another one of the “Comics’ Greatest World” books from the early 1990s and while John Ostrander does a pretty good job with the script, I kind of shrugged when I was done.  The most memorable thing for me was the way that Hero Illustrated was advertising an exclusive Extreme Studios “jam comic”–as if that’s an incentive for someone to buy.

Last Train to Deadsville: A Cal McDonald Mystery #2 (Dark Horse):  Steve Niles’ script is witty and I enjoyed the read, but I’m not a fan of Kelley Jones beyond a few things and this isn’t one of them.

Warriors of Plasm #2, 3, 4 (Defiant):  The only issue of this series that I ever actually owned was the Plasm #0 that came in an issue of Previews and later as something you could assemble via a trading card set.  The card set will get you about $25 on eBay; Plasm #0 might get you $7-8 depending on the condition (a little more if the issue of Previews, which also covers Batman #500, is around it).  Otherwise, the rest of these are quarter bin fodder.  And upon reading them, I can see why because they’re pretty incomprehensible.  Something about a revolution and goop and sex and what wound up being a huge failure on the part of Jim Shooter.  A serious hard pass on this.