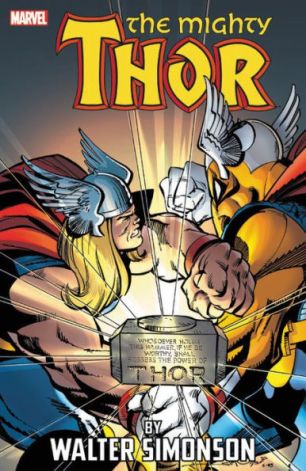 About a year ago, Amazon was having one of those massive Kindle graphic novel sales that was all Marvel books (it may have been because Infinity War was coming out) and I think I bought what had to be a couple of hundred dollars’ worth of digital trade paperbacks for $.99-$2.99.  Among them were the first two volumes of Walt Simonson’s run on Thor from the 1980s.

My familiarity with Thor is basically from what I have read of the Busiek/Perez Avengers, the first couple of Ultimates series, and the MCU.  Granted, my familiarity with most Marvel characters comes via the movies and maybe a couple of comics (except the X-Men).  But word-of-mouth on Simonson’s Thor was that it was a “must read” and I figured that at that price even if I didn’t like it, it worth it.

Fortunately, this is one that lives up to its hype.  I know that it’s probably been recolored (or at least touched up/remastered), but it looks absolutely gorgeous and is truly epic in scope.  I’m not going to go too much into the plot, but it begins with the first appearances of Beta Ray Bill and then moves its way toward a huge war for Asgard and Earth featuring demon invasions, an old enemy coming back to seek revenge on Odin, and a ton of guest appearances from various Marvel heroes.  I found myself poring over each page and reading everything thoroughly (something I admit I don’t always do with comics) because I wanted to take in everything.  I left wanting more and wondering if there were other volumes to purchase or if this should be another check mark in the “get a new tablet and a Marvel Unlimited subscription” column.  Either way, if a near-novice like me can figure out what’s going on almost immediately and be completely enraptured, then anyone can.