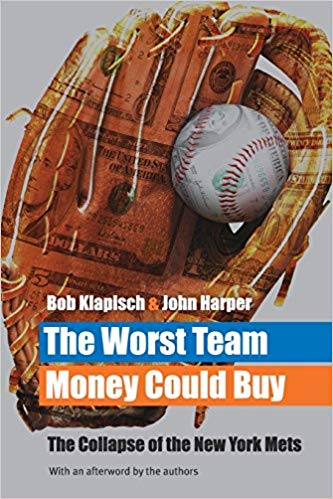 I am a long-suffering New York Mets fan who is part of a specific generation where the “suffering” part of that compound adjective took a while to come along.  I began following the team in the 1985 season and was nine years old when they won their second (and to date last) World Series in 1986.  So I spent most of the back half the 1980s feeling like the team was going to keep on winning.  Oh sure, there was Terry Fucking Pendelton’s home run in 1987 and the 1988 NLCS loss, but even after those, it seemed like the Mets were going to be in some sort of contention every year.

Then the Nineties began and the downslide that had begun in 1988 went into full swing, with most of the championship team being shown the door and slides in the standings while I watched teams like the Cubs and Pirates go to the playoffs instead.  But in the 1991 offseason, the Mets began making huge free agent moves, acquiring Bobby Bonilla and Brett Saberhagen, and seemed ready to bring back the glory they once had.  Unfortunately, it was an unmitigated disaster.

This is what Bob Klapisch and John Harper, two longtime New York sportswriters, set out to cover in The Worst Team Money Could Buy, a book first published in 1993 that had a new edition released in 2005 (with a new epilogue).  They were with the team throughout the entire 1992 season and covered the ups and downs of the team, which included on-the-field mishaps as well as several off-field controversies that included sexual assault allegations against David Cone and Dwight Gooden’s recurring problems with drugs and alcohol.  Not to mention clubhouse antics and the oft-adversarial relationship between the players and the press.

Now, I lived through this year as a Mets fan, along with the even-worse 1993 and 1994 (which included the Vince Coleman firecracker incident and Anthony Young’s losing streak), and if you have no problem remembering the pain the team put you through, this is worth the trip down memory lane.  But if you’re a baseball fan–or even just a sports fan–it’s a remarkable read.  Klapisch and Harper do a great job at relating what it’s like to essentially be a “beat” reporter for a specific baseball team.  They are honest about how they managed relationships with players, how they sometimes had to fight to figure out what they were going to write about (especially in spring training when things are especially boring), and even the terminal boredom of a 162-game season. They also humanize the players, not shying away from how large the egos ran while the team plummeted toward the basement.