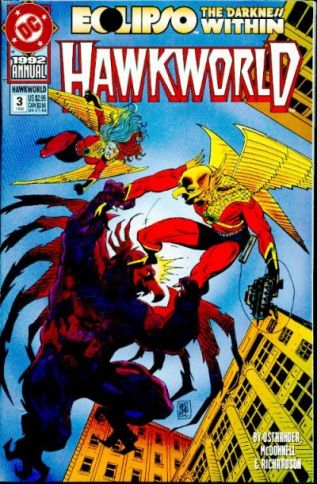 There is a six-part storyline that will end Hawkworld called “Flight’s End”, which will finish out the series.  But before that, we’ve got two comics, one of which ties up some loose ends from “Escape from Thanagar” and the other which ties into Eclipso: The Darkness Within, which was 1992’s company-wide crossover.

In issue #26, the Thanagarian ambassador hires the Shadow Thief to finish what couldn’t be done in the previous storyline–steal Attila and take it back to Thanagar–while there are further political back and forths on the home planet.  It’s a pretty solid one-off story because Hawkman and the Shadown Thief have a really good fight and the subplots don’t overwhelm the action.

The Eclipso crossover features Hawkwoman getting eclipsed courtesy of a black diamond given to her by Dr. Kaslak, the museum curator who doesn’t like the Hawks at all.  Katar doesn’t get eclipsed himself but instead barfs up some sort of Eclipso/Hawk Monster that winds up trying to destroy half of Chicago.

I actually owned this issue back in the day because I collected the entire crossover–I’d also get Bloodlines the following year and that would be my final annual-based crossover/event I would collect–and it’s actually a pretty good episode of this event.  Eclipso was a really good crossover, even though some of the tie-in comics were uneven.  The good ones were intriguing and well-written; the bad ones had some awful artwork.  Here, at least, we get a furthering of the overall story and a lot of action.

I apologize for not posting much of a review here.  Honestly, these were two issues I enjoyed but was rather ambivalent toward and threw on the pile.  Hopefully, the series will finish strong.