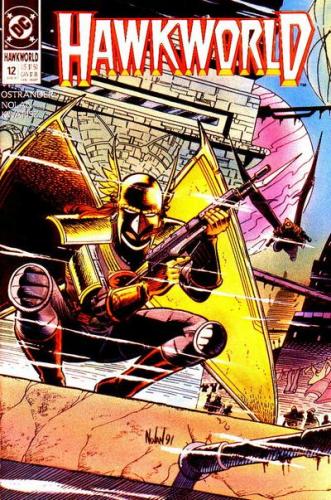 After the Byth storyline, Hawkworld is at one of those impasses that happens to a lot of comic and television shows when they have to move on from the defeat or death of a big bad.  Thankfully, John Ostrander (and Tim Truman before him) had spent enough time laying groundwork via Thanagarian politics that this next storyline was ready to go.  Here, Shayera has to take the unconscious Byth back to Thanagar so he can face justice while Katar is back on Earth doing his job.

It literally is a split book for these five issues, something that does work in this series in a way it never really did in a later DC space/cosmic series, Darkstars.  Katar continues to get used to being among humans, including a relationship with a Chicago museum curator named Mavis and a friendship/allyship with Weng Chan of The Blackhawks.  Shayera, on the other hand, has to contend with a growing amount of unrest on Thanagar–the underworlders are slowly building a resistance and uprising while the Thanagarian army has created its own Hawkman Corps, who purport to be an elite fighting force but seem to be more of a Gestapo.

Shayera also learns the truth behind her origin and parentage.  We first met her in the three-issue Tim Truman series as a girl whom Katar had encountered among a group of underworlders; years later, she had been adopted by Shayera Thal’s father and given his dead daughter’s name.  We find out here that she’s actually that Shayera’s daughter, conceived as a result of a very illicit affair between Thanagarian politican Andar Pul and an extremely young Shayera (there’s the implication that it’s not 100% consensual, either).  Shayera meets her grandmother and the family dynamics and politics overlap.

For a follow-up storyline, it’s solid.  Ostrander takes Hawkwoman off-world so that we can get Thanagarian interludes without it interrupting too much of the story set in Chicago.  Plus, it’s always good to split a team up for a little bit to see if the characters can handle things on their own.  The title continues to be a drama/action/sci-fi series that is very in line with what we would see in movies and television series (especially syndicated ones) of the time.  In fact, the underworlders would fit in very well with the Mars mutants of Total Recall.

I have a feeling that Ostrander is setting up something big for these characters a few issues down the line–okay, since I own the series and there is a multi-part “Escape from Thanagar” storyline coming up, I know that he is–and that’s enough to keep me going.  Graham Nolan’s art continues to be very solid, although he’s better when he’s inking himself.  Tom Mandrake does a fill-in issue where Hawkman teams up with Firehawk and he does a fine job of penciling as well.  I still have issues with the coloring, or at least how the printing process works with this coloring.  It’s still too bright and reads like someone played with the picture settings on a television to oversaturate everything.  I’m hoping that by the time we get toward the end of the run, that will have fixed itself.

As I said last post, I’m keeping my judgment until the end, so I’m going to keep going for now.