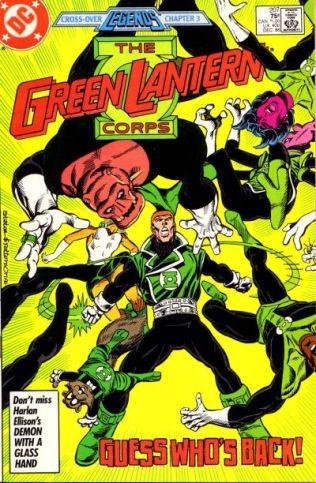 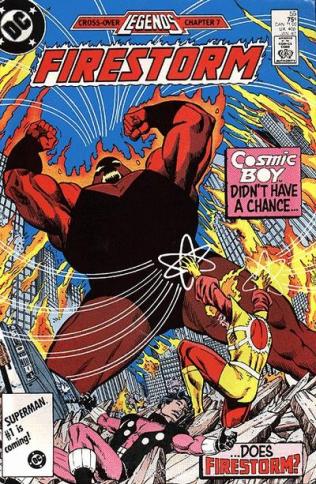 Two comics that aren’t from the same title get reviewed here because they’re both Legends crossovers and were published pretty close to one another (GL Corps is “Chapter 3” of Legends and Firestorm is “Chapter 7) and I believe that puts them in the first third of the series, although I think that GL Corps takes place before Legends #1 and Firestorm afterwards.

There’s not too much about Legends itself in the GL issue, except to reintroduce Guy Gardner to the title because the hadn’t really been around much since the epic issue #200 of the series (which tied up most of the loose ends from the Corps’ association with Crisis).  It’s Guy vs. the Corps and then sends him off to the pages of Legends where he will be eventually become the GL in the new Justice League/JLI.

In Firestorm, after fighting Brimstone and laying waste to a decent part of the city, Ronnie and Martin Stein are fighting over whether or not they should keep being Firestorm, especially in the face of G. Gordon Godfrey’s constant railing against superheroes.

Both are pretty solid and I’m trying to decide whether or not I want to off-load these Legends crossovers or maybe still hold on to them, collect all of the individual issues and then read the entire crossover in the order DC put on its covers.  I had originally gotten the idea to do so back when Michael Bailey covered the crossover on Views from the Longbox a few years ago and as I look through these books that I do own, I think I may hold off on selling and donating because there aren’t a ton of comics to buy.

That’s my long-winded way of saying …