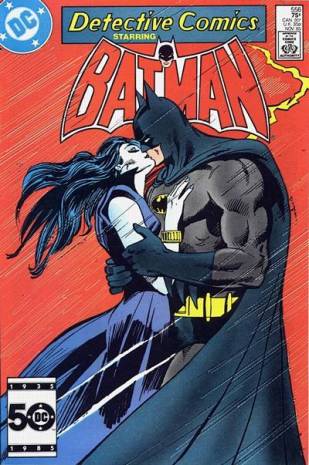 So here’s one that I had been familiar with but had never read because the cover image was used on one of the introduction pages of The Greatest Batman Stories Ever Told.  It’s also one that, if I had owned it back in the day, I would have definitely held onto because even though there’s no banner on it, it is a Crisis on Infinite Earths crossover.  Sort of, anyway.

This is one of the famous “red skies” crossovers that popped up in various DC books, meaning that while the story inside actually has nothing to do with Crisis, there area  number of panels where the sky is colored red, there’s similar colored rain, and a number of the characters make comments on the skies and weather.  Based on when this came out, issue #8 of the series would have been on sale, but I think that the “red skies” crossovers were all supposed to take place prior to the end of issue #4.  I actually have the recently published crossover companion hardcover, which does have a complete timeline, but I’m typing this in another room  and am too lazy to get up and look at it.

ANYWAY, the red skies crossover part is kind of comical because of the way that Doug Moench keeps having Commissioner Gordon, Harvey Bullock, and Nocturna repeatedly mention it and yet if you took the red skies out of the issue, the plot would be the same.  That plot, by the way, is another chapter in what was a pretty long storyline involving Batman, Jason Todd, Nocturna, and the villain Night-Slayer.  At one point, I’d owned issue #547, which I bought because of the cover of Batman taking off his mask and everyone saying “YOU?!?”  That issue was part of this storyline, so this had been going on for nearly a year.

The gist of it is that after a lot of drama that I’m not privy to, Jason Todd is very protective of Nocturna, even though she is clearly going back to a life of crime because we see her having taken over Black Mask’s False Face Society.  The Night-Slayer, who I think is either her ex-lover or brother, is also back and has been killing criminals throughout Gotham.  Batman shows up about halfway through the issue after an opening where Harvey Bullock corners Nocturna at an old observatory but refrains from shooting her Robin jumps in front of her.  Bullock then takes his frustration out at the gun range and vents to Gordon.  Meanwhile, Batman does investigate what the Night-Slayer is doing, there is a small fight, and then he goes to see Nocturna about the fact that she actually did go back to her life of crime.  The scene on the cover is depicted on the very last panel of the Batman story.

I went into this with the mentality of someone who would have been a kid or a casual comics reader in 1985 (which I was–I was eight years old and would buy the occasional issue of Transformers or Superman), so I treated this as if I had seen the cover and grabbed it off the stands (which I did–I got this out of the back issue bins at my LCS last year during their fill-a-shortbox-for-$25 “Shortboxtober” sale).  Going in more or less cold, Moench writes an intriguing enough story to get me hooked, Nocturna and the Night-Slayer are compelling villains, and this seems to be setting up a bigger confrontation between Batman and the two characters, perhaps even with consequences for Jason. Plus, Gene Colan and Bob Smith are on the art for this one and it is gorgeous.  Even though this is still the Bronze Age “blue and grey” Batman, they give him a sense of dark mystery that matches the horror-like aspects of Nocturna and the Night-Slayer.  I have no idea whether or not the rest of this storyline is any good, but for what’s obviously a set-up/bridge chapter, I thought it was well-written and well-paced.

There’s also a Green Arrow backup where the character Onyx is trying to get him to return to his old monastery and take on some guy named Lars who has been up to some shenanigans.  Joey Cavalieri’s plot is interesting even though the script is a little weak (Ollie just constantly wisecracks, sometimes with very dated pop culture references), but Jerome K. Moore does the artwork and it’s gorgeous.  I don’t think that Jerome K. Moore has done a ton of interior artwork in his career–I remember him doing a lot of covers for DC’s various Star Trek series in the early 1990s–but the times when I have seen it (especially New Titans #86) have been real treats.  It’s just absolutely gorgeous stuff and it alone makes reading the backup worth it.

I am not sure if this is collected in trade yet.  I’m pretty sure I could get it on Comixology if I wanted to.  I’m definitely sure that at some point, Michael Bailey and Andrew Leyland will be covering it on “The Overlooked Dark Knight.”  It’s worth the quarter or so I paid for it (literally–the condition is a little rough) and I may seek out some more of this era of Batman when the opportunity presents itself.